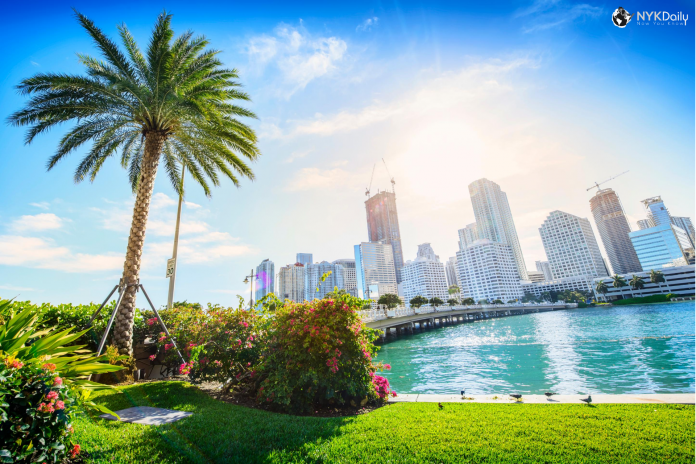 Miami is the seat of Miami-Dade County and the economic, cultural, and financial capital of Florida. The city presently incorporates an area of about 56 square miles between Biscayne Bay to the east and the Everglades to the west. Miami is the 6th most densely populated major city in the United States, with an estimated population of 467,963. In 1896, Miami was officially accepted as a city with a population of just over 300.

However, we will go back and start the history of Miami from the land before time.

The oldest evidence of Native American settlement in the Miami region can be recorded from around 10,000 years ago. The area was filled with pine-hardwood forests and was home to lots of bears, wildfowl, and deers. These original inhabitants resided on the Miami River banks, with their principal settlements on the northern banks. Early Native Americans developed a variety of tools and weapons from shells.

When the first Europeans visited in the 1500s, the Miami area settlers were the Tequesta people, who lived in an area covering much of southeastern Florida. The Tequesta Indians hunted, fished, and gathered the roots and fruits of plants for food.

In the early 1500s, Juan Ponce de León was the first European to visit the Miami area by traveling into Biscayne Bay. In his journal, he wrote that he reached Chequescha, which was Miami’s first documented name. Pedro Menéndez de Avilés and his team made the first documented landing in this area when they toured the Tequesta settlement in 1566 while searching for Avilés’ missing son. He had been shipwrecked a year earlier. Led by Father Francisco Villareal, Spanish soldiers constructed a Jesuit mission across the Miami River a year later, but it was short-lived. By 1570, the Jesuits chose to look for safer places outside of Florida. After the Spaniards left, the Tequesta Indians were abandoned to fight European-introduced diseases, such as smallpox, without any help. Wars with other tribes significantly weakened their population and the Creek Indians comfortably defeated them in later battles. By 1711, the Tequesta had sent a couple of regional chiefs to Havana to ask if they could move there. The Spanish sent two boats to help them, but their diseases struck, destroying most of their population. In 1743, the Spaniards sent another commission to Biscayne Bay, where they built a church and fort. The missionary priests offered a permanent settlement, where the Spanish settlers would raise food for the Native Americans and soldiers if they accept Christianity. However, the plan was rejected as unrealistic, and the mission was dissolved before the end of the year.

The first continual European settlers in the Miami area came around 1800. Pedro Fornells, a Menorcan survivor of the New Smyrna colony, traveled to Key Biscayne to meet the duration of his Royal Grant for the island. Although he retreated with his family to St. Augustine after six months, he left a caretaker behind. On a journey to the island in 1803, Fornells had recorded the presence of squatters (an individual or group of people who illegally occupy an abandoned building or unused land) on the shore across Biscayne Bay from the island. In 1825, U.S. Marshal Waters Smith toured the Cape Florida Settlement and discussed with squatters who wanted to establish ownership of the land they were seizing. On the mainland, the Bahamian “squatters” had dwelled along the coast beginning in the 1790s. John Egan had also earned a gift from Spain in the Second Spanish Period. John’s wife Rebecca Egan, son James Egan, his widow Mary “Polly” Lewis, and Mary’s brother-in-law Jonathan Lewis all got 640-acre land grants from the U.S. in present-day Miami.

In 1825, the Cape Florida Lighthouse was constructed on nearby Key Biscayne to alert passing ships of the rocky reefs.

In 1830, Richard Fitzpatrick purchased land on the Miami River from Bahamian James Egan. He built a farm with slave labor, where he cultivated bananas, sugarcane, maize, and fruits. In January 1836, soon after the Second Seminole War, Fitzpatrick dismissed his slaves and closed his plantation.

The area was struck by the Second Seminole War, where Major William S. Harney led numerous raids against the Indians. Fort Dallas was situated on Fitzpatrick’s farm on the north bank of the river. Most of the non-Indian population comprised soldiers posted at Fort Dallas. The Seminole War was the most destructive Indian war in American history, with complete annihilation of native people in the Miami area. The Cape Florida lighthouse was blazed by Seminoles in 1836 and was not restored until 1846.

The Miami River lent its title to the burgeoning town, extending an etymology derived from the Mayaimi Indian tribe. In 1844, Miami became the county seat, and six years later, statistics reported that ninety-six residents were living in the area.

From 1858 to 1896, only a few families made their homes in the Miami area. The first of these towns formed at the Miami River’s mouth and was varyingly called Miami, Miamuh, and Fort Dallas.

In 1891, a Cleveland lady, Julia Tuttle, chose to move to South Florida to have a fresh start in her life after the death of her husband, Frederick Tuttle. She purchased 640 acres on the north bank of the Miami River in present-day downtown Miami.

She tried to convince railroad magnate Henry Flagler to expand his rail line, the Florida East Coast Railway, southward to the area but he initially declined.

On April 22, 1895, Flagler transcribed Tuttle a lengthy letter recapping her offer of land to him in trade for stretching his railroad to Miami, laying out a city, and constructing a hotel. The terms provided that Tuttle would grant Flagler a 100-acre (0.4 km2) plot of land for the town to grow. Around the same time, Flagler wrote a similar letter to William and Mary Brickell, who had also orally admitted to giving land during his visit.

The news of the railroad’s expansion was formally announced on June 21, 1895. In late September, the work began, and planters began streaming into the promised “freeze-proof” lands.

On February 1, 1896, Tuttle met the first part of her agreement with Flagler by surrendering two deeds to transfer land for his hotel and the 100 acres of property near the hotel site. On March 3, Flagler commissioned John Sewell from West Palm Beach to start work on the city as more people came into Miami. On April 7, 1896, the railroad tracks eventually reached Miami, and the first train arrived on April 13. It was a unique, unscheduled train, and Flagler was on board.

On July 28, 1896, the association meeting to make Miami a city took place. The right to vote was limited to all men who resided in Miami or Dade County. Joseph A. McDonald, Flagler’s chief of development at the Royal Palm Hotel, was chosen chairman of the meeting. After assuring that enough voters were present, the motion was made to incorporate and establish a city council under the corporate name of “The City of Miami,” with the boundaries proposed. John B. Reilly, who oversaw Flagler’s Fort Dallas land company, was the first elected mayor.

In 1896, Miami was officially accepted as a city with a population of just over 300.