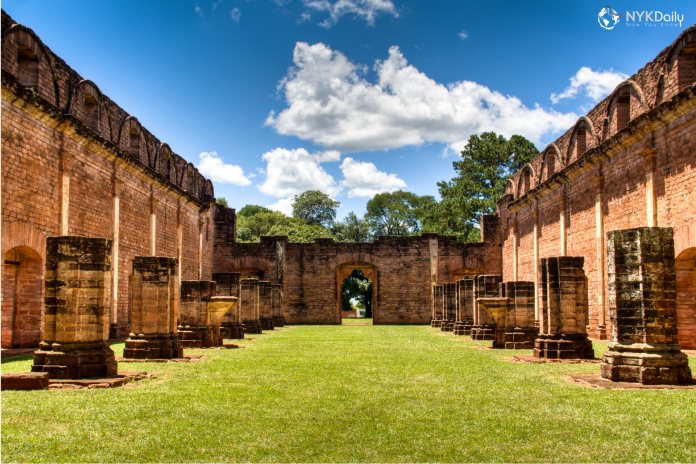 This is part-7 of Historic Battle Series.

The Paraguayan war was a South American war fought from 1864 to 1870, between Paraguay and the Triple Alliance of Argentina, Uruguay, and the Empire of Brazil. It was the deadliest and bloodiest inter-state war in Latin America’s history. It especially devastated Paraguay, which experienced catastrophic losses in the population, and it was obliged to cede the region in conflict with Brazil and Argentina.

Why was the war fought?

Since their liberation from Spain and Portugal in the early 19th century, the Empire of Brazil and the Spanish-American nations of South America were disconcerted by regional disputes. All countries in the region had ongoing boundary disputes with multiple neighbors. Most had coinciding claims to the corresponding territories. These concerns were questions acquired from their former metropoles, which, despite many attempts, were never able to solve them satisfactorily. Signed by Spain and Portugal in 1494, the Treaty of Tordesillas proved useless in the following centuries as both colonial powers extended their boundaries in South America and elsewhere. The antiquated boundary lines did not represent an actual occupation of lands by the Spanish and Portuguese.

By the early 1700s, the Treaty of Tordesillas was considered all but worthless, and it was clear to both parties that a newer one had to be drawn based on practical and reasonable boundaries. In 1750, the Treaty of Madrid divided the Portuguese and Spanish areas of South America into lines that mostly compared to present-day boundaries. Neither Pain nor Portugal was happy with the results, and new agreements were approved in the following years that either set new territorial lines or canceled them. The final contract signed by both powers, the Treaty of Badajoz (1801), reaffirmed the legality of the previous Treaty of San Ildefonso (1777) derived from the older Treaty of Madrid.

The territorial disputes became graver when the Viceroyalty of the Río de la Plata fell in the early 1810s, leading to the rise of Paraguay, Argentina, Uruguay, and Bolivia. Once separated, Paraguay, Argentina, and Bolivia argued over lands that were mostly unknown and unexplored. They were either barely populated or settled by indigenous tribes that answered to no parties. In Paraguay’s case with her neighbor Brazil, the dilemma was to determine whether the Apa or Branco rivers should signify their actual boundary, a tenacious issue that had plagued and confused Portugal and Spain in the late 18th century.

Paraguay took the lead during the first phase of the war, beginning the Mato Grosso Campaign by attacking the Brazilian province of Mato Grosso on 14 December 1864, followed by an attack of the Rio Grande do Sul province in the south in early 1865 and the Argentine Corrientes Province. Two separate Paraguayan forces invaded Mato Grosso simultaneously. An expedition of 3,248 troops, commanded by Col. Vicente Barrios, was transported by a naval squadron under Capitán de Fragata Pedro Ignacio Meza up the Paraguay River to the town of Concepcion. The Brazilian garrison of 154 men resisted for three days, under the command of Lt. Col. Hermenegildo de Albuquerque Porto Carrero. When their munitions were exhausted, the defenders evacuated the fort and withdrew from the river towards Corumbá on board the gunship Anhambaí. After occupying the fort, the Paraguayans advanced further north, taking the cities of Albuquerque, Tage, and Corumbá in January 1865. Despite these victories, the Paraguayan forces did not extend to Cuiabá, the province’s capital, where Augusto Leverger had fortified the camp of Melgaço. Their main objective was to capture the gold and diamond mines, disrupting the flow of these matters into Brazil until 1869.

Brazil sent an expedition to fight the invaders in Mato Grosso. A column of 2,780 men led by Col. Manuel Pedro Drago left Uberaba in Minas Gerais in April 1865 and arrived at Coxim in December after a severe march of more than four provinces. However, Paraguay had already dropped Coxim by December. Drago reported at Miranda in September 1866, and Paraguayans had left once again. Col. Carlos de Morais Camisão assumed command of the column in January 1867—now with only 1,680 men—and decided to invade Paraguayan territory, which he infiltrated as far as Laguna where Paraguayan cavalry forced the expedition to retreat.

Despite the efforts of Camisão’s troops and the region’s resistance, which succeeded in liberating Corumbá in June 1867, a large portion of Mato Grosso remained under Paraguayan control. The Brazilians retracted from the area in April 1868, moving their troops to the main theatre of operations south of Paraguay.

Counter Attack: By late 1864, Paraguay had scored a series of victories in the war; on 11 June 1865; however, its naval defeat by Brazil on the Paraná River began to turn the tide. The naval battle of the Riachuelo was a crucial point in the Paraguayan war, marking the beginning of the offensive of the Allies. In subsequent months the Paraguayans were driven out of the cities of Corrientes and San Cosme, the only Argentine territory still in the Paraguayan colony.

Fall of Humaitá: The coupled Brazilian–Argentine–Uruguayan army continued pushing north through hostile territory to surround Humaitá. The Allied force propelled to San Solano on the 29th and Tayi on 2 November, isolating Humaitá from Asunción. Before dawn on 3 November, Solano López reacted by ordering the attack on the allies’ rearguard in the Second Battle of Tuyutí. On 19 February, Brazilian ironclads successfully made passage up the Paraguay River under heavy fire, gaining full control of the river and isolating Humaitá from resupply by water. Humaitá fell on 25 July 1868, after a long siege.

Fall of Asunción: Asunción was seized on 1 January 1869, by Brazilian Gen. João de Souza da Fonseca Costa, father of the future Marshal Hermes da Fonseca. On 5 January, Caxias invaded the city with the rest of the army. Most of the Caxias army resided in Asuncion, where 4000 Argentinian and 200 Uruguayan troops soon arrived together with about 800 soldiers and officers of the Paraguayan Legion. By this time, Caxias was ill and tired. On 17 January, he collapsed during a mass; he abandoned his command the next day, and the day after that left for Montevideo. Soon after, the city hosted about 30,000 Allied soldiers; for the next few months, these plundered almost every building, including diplomatic missions of European nations.

The son-in-law of Emperor Pedro II, Luís Filipe Gastão de Orléans, Count d’Eu, was chosen in 1869 to direct the final phase of the military regulations in Paraguay. At the head of 21,000 men, Count d’Eu led the campaign against the Paraguayan resistance, the Campaign of the Hills, which lasted over a year. President Solano López created the opposition in the hilly range northeast of Asunción. At the end of the war with Paraguay suffering severe shortages of weapons and supplies, Solano López reacted with draconian attempts to keep order, ordering troops to kill any of their colleagues, including officers, who talked of surrender. Paranoia prevailed in the army, and soldiers fought to the bitter end of a resistance movement, resulting in more destruction.

Two detachments were sent in pursuit of Solano López, who was accompanied by 200 men in the forests in the north. On 1 March 1870, the troops of General José Antônio Correia da Câmara overwhelmed the last Paraguayan camp in Cerro Corá. During the ensuing battle, Solano López was wounded and isolated from the remainder of his army. Too weak to walk, he was accompanied by his aide and a pair of officers, who led him to the banks of the Aquidaban-nigui River. The deputies left Solano López and his aide there while they looked for aids.

Before they returned, Câmara arrived with a small number of soldiers. Though he attempted to permit Solano López to surrender and pledged his life, Solano López refused. Shouting, “I die with my homeland!“, he tried to engage Câmara with his sword. He was quickly killed by Câmara’s men, concluding the prolonged conflict in 1870.