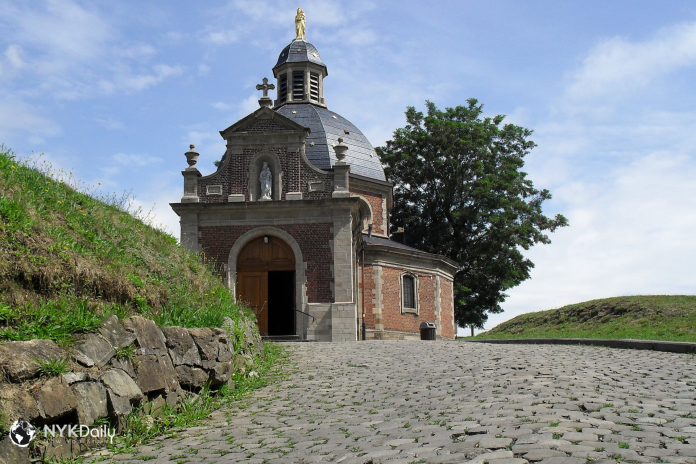 Geraardsbergen is a city tucked away in the Denderstreek and the Flemish Ardennes, the hilly southern part of the Belgian province of East Flanders. Although not well known to your typical tourist doing their account of the “grand tour,” this city on the Dender Riverbanks is full of shocks.

You may have heard of this cute boy, but may not have been aware that he lives in Geraardsbergen. The Manneken Pis, which is the symbol of Brussels, is a copy of the original from this Flemish city.

After snapping photos of the city’s number one citizen, drive across the square to St. Bartholomew’s Church. Although it was constructed hundreds of years ago, it has sustained damage over the years and has been renewed several times. I discovered it to be one of the more welcoming and more comfortable churches that I have ever attended anywhere. You are greeted into this tranquil building by soothing music – Gregorian chants.

Leaving the church, make a u-turn and when you pass the street, you’ll see Grupello Park, the sheerest park in Flanders. At the foot of the park is a strange statue of an elephant that looks like it just fell off a Cote d’Or chocolate box. It is a monument devoted to the people of the city who were executed in the Belgian Congo. At the top end of the park is a huge and powerful gold plated statue of Jesus Christ known as the Holy Heart.

Since you are halfway up the cliff, you can either proceed through the park to the Oudenberg Chapel or just come back into the village and head up there by way of the Muur. The “Wall” is a cobbled road that has become popular due to it being the most challenging part of the course for cyclists in the famous Tour of Flanders race. It has also been a focus of previous Tour de France races as well as many local ones. You’re totally welcome to give it a try on your bike, but beware that it is a steep slope that goes up to a 15-22% incline at one point as it rises to 110 meters above sea level. A moderate walk is my preferred option where one can take their time and even take a break seven times en route to where buildings with cycling poems can be seen and relished.

Your prize at the top of the hill in the region, known as the Flemish Ardennes, is a phenomenal view and an opportunity to visit the little neo-Baroque Chapel of Our Dear Lady. There is an eatery there, but I would suggest that you take the stairs back down, go through the park and rejuvenate yourself in one of the cafes back in the town square. By all means, wet your whistle with a regional Flemish beer but don’t overlook Mattentaart.

Mattentaarts have been made in the area since the medieval era and came about because growers could not preserve their milk. The basis of the tart is soured milk. Other elements are sugar, almonds, and egg yolks that are cooked in a pastry. There is an exciting film in the tourist office that shows the method of making this delicacy. You can buy a few of them at any bakery in the village and take them back with you. There is so much more to see and do in the area and the town, stop by their visitor guide office right there in the main square for a list of stuff to see and enjoy.