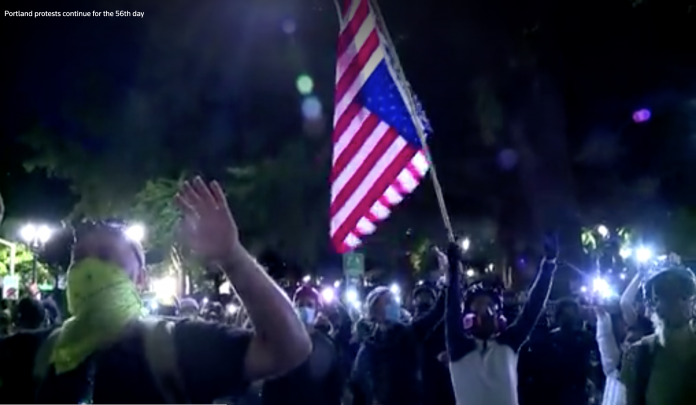 Federal agents fired tear gas canisters at Black Lives Matter demonstrators in downtown Portland early on Friday in a 56th straight day of protests, amid growing scrutiny over the use of border patrol officers in the city.

Positioned behind a steel fence, agents began firing tear gas after a small group of protesters, many helmeted and wearing face masks, lit a fire at the entrance of the building shortly after midnight.

Saying they were being hit with projectiles and lasers, federal agents declared an unlawful assembly and forced protesters back up a block from the federal courthouse.

The agents then retreated to a different corner of the courthouse and confronted protesters there, lobbing more canisters that bounced off the walls of buildings into protesters. Journalists were clearly identifiable in the crowd.

Security forces have frequently tear-gassed and clubbed demonstrators during the unrest. The U.S. Justice Department said on Thursday it would investigate the use of force by federal agents in Portland after another night of unrest in which Mayor Ted Wheeler was tear-gassed.

The investigations follow public anger over the deployment of federal border patrol officers to Portland against the wishes of local officials. U.S. President Donald Trump’s administration has said it is sending a similar contingent to Seattle.

Earlier on Thursday, a federal judge issued a temporary restraining order barring federal law enforcement from using force against journalists and legal observers at the Portland protests. This followed a lawsuit filed on behalf of journalists whom federal agents had hit with non-lethal “impact munitions.”

Demonstrators and local officials see the deployment of the agents in Portland as a ploy by Trump to drum up a “law and order” campaign as he faces an uphill re-election battle.

Homeland Security Secretary Chad Wolf has said all federal agents have been making lawful arrests and properly identifying themselves as law enforcement.

Mayor Wheeler, a Democrat, has called the intervention an abuse of federal power and said it was escalating the violence.

In Geneva, the U.N. human rights office said U.S. police and security forces must not use disproportionate force against protesters and journalists, or detain them unlawfully.

“It is very important that people are able to protest peacefully, that people aren’t subject to unnecessary, disproportionate or discriminatory use of force,” Liz Throssell, U.N. human rights spokeswoman, said.

Earlier in the evening a crowd of thousands of Black Lives Matter supporters gathered in the city center.

“I’m so inspired to see a sea of people who don’t look like me who are saying Black Lives Matter,” said Damany Iqwe, referring to the majority-white crowd.

Iqwe, 43, is a Black man who grew up in Portland and has frequently attended protests that have continued since the death of George Floyd, an unarmed Black man, in police custody in Minneapolis on May 25.

“This city is one of the most systematically racist places to live in as a Black man,” Iqwe said.