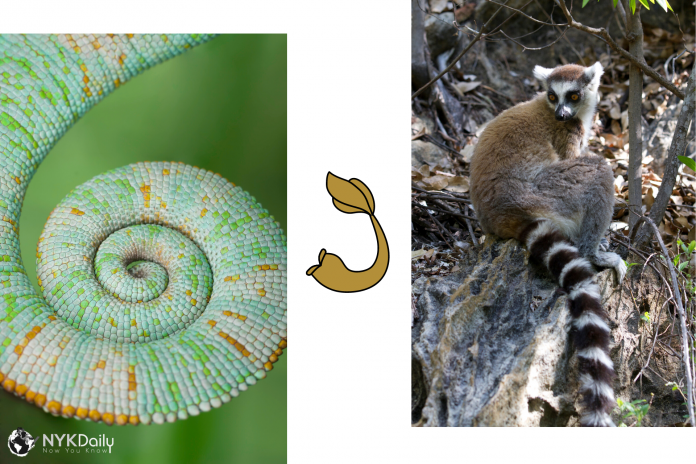 The tail is the body part at the rear end of certain kinds of animals’ bodies: in general, it refers to an apparent, flexible appendage to the torso. It is the body party that corresponds roughly to the sacrum and coccyx in mammals, reptiles, and birds. While tails are mainly a feature of vertebrates, some invertebrates, including scorpions and springtails, and snails and slugs, have tail-like appendages that are sometimes referred to as tails.

In simple words, lizards, elephants, and fishes all have something in common. They own flexible, soft structures at the rear of their bodies that we call tails.

The old world fishes were extremely different. They had two flexible organs-a flexible fin and a fat tail, one resting atop the other. The caudal fish fin began as a co-opted median fin. Over evolutionary time, to adapt to their environments, fishes lost one of these tails. The new world fish evolved with one flexible tail to provide a source of locomotion and easy passage underwater. Evolution enabled faster movement underwater for fishes and other marine animals.

The tetrapod tail likely started as a limb-like outgrowth in the first vertebrates. They had an extra limb hanging from the rear of the mammal. During evolution, the mammals got more extended legs and a longer neck. The head became longer and slimmer. At first, the hind legs were longer than the front legs; later on, they were not. The limb in the rear of the vertebrae got replaced by a hairy flexible tail. In cats and kangaroos, tails evolved to provide balance. In zebras, horses, and other land mammals, tails evolved to brush away flies and other biting insects. In New World monkeys, tails allow them to grasp tree branches.

Evolution of tails in reptiles (lizards, crocodiles, and snakes) was possible due to gravity. Yes, gravity. Gravity imposes significant constraints on blood circulation. Arboreal snakes have relatively longer tails than non-climbing species because of the gravity. The gravitational pull elongated the extra limb in some reptiles developing, what we now call it, a tail.

Tails are like manners – essentially, every animal has them. But what about humans? Why are we missing out? We will explore this in our next article.