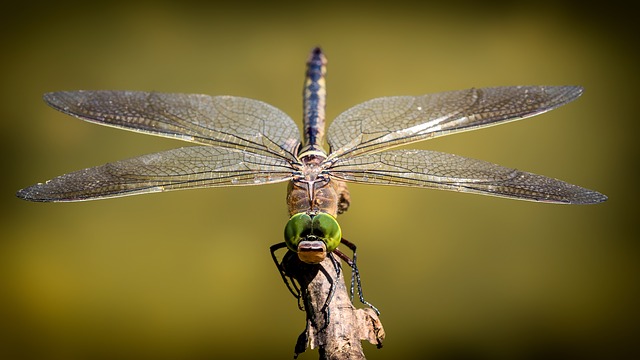 Insect wings are outgrowths of the insect exoskeleton that allow insects to fly. They are located on the second and third thoracic sections, and the two pairs are often attributed to as the forewings and hindwings, respectively, though a few insects lack hindwings, even rudiments. The wings are reinforced by several longitudinal veins, which often have cross-connections that form closed “cells” in the layer. The patterns emerging from the blending and cross-connection of the wing veins are often indicative of various evolutionary lineages and can be used to recognize the family or even genus level in many systems of insects.

This hypothesis implies that the insect’s wings evolved from paranotal lobes, a preadaptation found in insect fossils that are believed to have assisted stabilization while hopping or falling. In favor of this hypothesis is most insects’ tendency, when agitated while climbing on branches, to avoid dropping to the ground. Such lobes would have worked as parachutes and allow the insect to land more softly. The theory proposes that these lobes gradually grew larger and developed a joint with the thorax in a later stage. Even later would form the muscles to move these crude wings. This model implies a gradual increase in the wings’ effectiveness, beginning with parachuting, then sliding, and finally active flight. The lack of tangible fossil proof of the development of the wing joints and muscles poses a significant difficulty to the theory, as does the apparently spontaneous development of articulation and venation, and experts in the field have primarily denied it.

This theory proposed that a potential origin for insect wings might have been the free abdominal gills found in many marine insects, such as on nymphs of mayflies. According to this theory, these tracheal gills commenced their way as doors of the respiratory system, and overtime was transformed into locomotive purposes, eventually developed into wings. The tracheal gills are furnished with little winglets that perpetually vibrate and have their tiny muscles.

The hypothesis with perhaps the most persuasive evidence explores mutation as the reason for the evolution of insect wings. This was propelled by Trueman based on a study by Goldschmidt in 1945 on Drosophila melanogaster, in which a pod mutation displayed a mutation transforming standard wings to what was interpreted as a triple-jointed leg composition with some additional appendages but lacking the tarsus, where the wing’s coastal surface usually would be. This mutation was reinterpreted as strong evidence for a dorsal exite and endite fusion, rather than a leg, with the appendages fitting in much better with this hypothesis.

The fossil larvae of Coxoplectoptera provided valuable new clues to the debated question of the evolutionary origin of insect wings. Before the larvae fossil discovery, the paranotal-hypothesis and the leg-exite-hypothesis have been viewed as opposed to alternative explanations, which have both been approved by shreds of evidence from the fossil record, similar morphology, developmental biology, and genetics. The appearance of leg genes in the ontogeny of the insect wing has been extensively considered conclusive evidence in support of the leg-exite-hypothesis, which suggests that insect wings are obtained from mobile leg appendages (exites). However, the larvae of Coxoplectoptera show that the intestinal gills of mayflies and their ancestors are generally considered to be corresponding structures to insect wings, connected within the dorsal tergite plates. This cannot be seen in modern mayfly larvae, because their abdominal tergites and sternites are welded to rings, without any traces left even in embryonic development.

Source: “The Phylogenetic Origin and the Nature of the Wings of Insects According to the Paranotal Theory”. Journal of the New York Entomological Society, Ross, Andrew (2017). “Insect Evolution: The Origin of Wings”. Current Biology, “Dragonfly flight III lift and power requirements”. Journal of Experimental Biology, Wikipedia