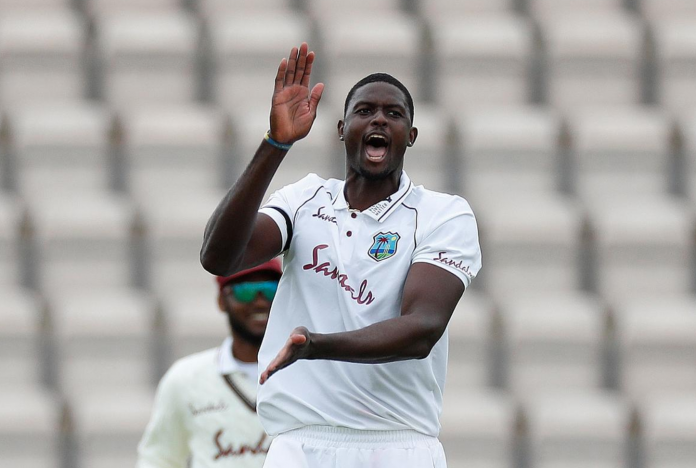 West Indies dominated the second morning of the first test against England on Thursday as Shannon Gabriel and Jason Holder took full advantage of bowler-friendly conditions to leave the hosts reeling on 106-5.

England began the day on 35 for one after only 17 overs were completed at the Ageas Bowl on Wednesday, but their top-order crumbled under murky skies as experienced paceman Gabriel struck twice in the first hour.

Gabriel had bowled Dom Sibley on Wednesday and produced a similar 90mph delivery that nipped back in to splatter Joe Denly’s off stump in the sixth over of the day.

In his next over the 32-year-old Gabriel trapped opener Rory Burns (30) in front of his stumps with a full delivery and while the umpire turned down his vociferous lbw appeal, West Indies successfully reviewed to leave England struggling on 51-3.

That brought Ben Stokes to the crease and he got off the mark in his first match as England captain, in the absence of Joe Root, by pulling Gabriel to the boundary

Zak Crawley looked anything but secure in reaching 10 and was on his way back to the pavilion after another excellent review by visiting skipper Jason Holder.

Holder’s delivery angled back in and struck the pad and while again the appeal was turned down, the DRS review gave Holder his first wicket.

Stokes and Ollie Pope produced a few boundaries as they looked to launch a counter-attack but Pope went for 12 when he was squared up by Holder and edged behind for a routine catch by wicketkeeper Shane Dowrich.

It could have been even worse for England shortly before lunch when Alzarri Joseph tempted Stokes into hooking and Kemar Roach failed to hold on to a diving catch at long leg.

Stokes (21 not out) and Jos Buttler (9 not out) will need to rebuild England’s innings after lunch.

International cricket returned after a 117-day absence on Wednesday because of the COVID-19 pandemic.

The match is being played without fans in a “bio-secure environment” with daily health checks for everyone in the ground, home umpires and a ban on shining the ball with saliva.