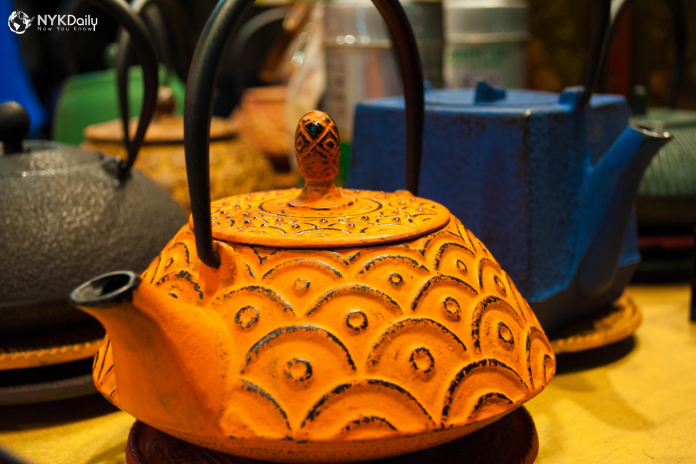 A teapot is a container used for steeping tea leaves or a herbal mix in boiling water and serving the final infusion called tea.

We are all aware of the major role of the teapot. But there is more to a teapot than it’s spout and handles. This simple vessel has a mighty, rich history that started in Ancient China.

The teapot originated in China during the Yuan Dynasty. It was derived from wine pots and ceramic kettles made of bronze and other metals and was a highlight of Chinese life for thousands of years. Tea preparation during earlier dynasties did not use a teapot. In the Tang Dynasty, a cauldron was utilized to brew ground tea served in bowls. Song Dynasty tea was made by simmering water in a kettle and then draining it into a bowl with finely ground tea leaves. A brush was then employed to stir the tea. Written proof of a teapot emerges from the Yuan Dynasty text Jiyuan Conghua, which represents a teapot that the author, Cai Shizhan, bought from the philosopher Sun Daoming. By the Ming Dynasty, teapots were widespread in China. The earliest model of a teapot that has remained to this day seems to be the one in the Flagstaff House Museum of Teaware; it has been recorded to 1513 and is attributed to Gongchun.

The first teapots originated in Early China and were produced from cast iron. Over time they began making teapots from earthenware and polished them with patterns of flowers and fruits. As the idea of painting teapots grew, teapot became an ornamental piece in the home and a functional item in the kitchen.

These early Chinese teapots were deemed small by western standards because they were normally designed for a single drinker, and the Chinese historically drank the tea straight from the spout. The size indicates the importance of serving individual portions so that the flavors can be better concentrated and tested, then repeated.

The original teapots arrived in Europe in the 17th century, along with the addition of tea from Asia. Although these items were formerly only available to the rich, by the 18th century, the Europeans began making teapots from bone china, making them cheaper and, therefore, open to all people.

The Tetsubin are cast iron teapots that dawned in Japan. They are used for traditional tea-drinking functions, which are an essential part of Japanese culture.

The use of silver and porcelain to make teapots came about a few years after the cast iron and clay models were produced, which began a new trend of using teapots for ornamental reasons.

The Brown Betty is a famous terracotta clay teapot that was made in England from the 17th century. It is iconic in the tale of English tea drinking, as is the classic silver tea set.

During the mid-1800s in England, hosting tea parties became a huge trend. Silver tea sets and extremely decorative and elaborately designed teapots were trendy amongst the rich.

Since then, English High Tea has become a relaxing occasion for many people, with five-star hotels and cafes promoting high tea events, which entails sampling of teas, petite cakes, and sandwiches.

To retain teapot’s heat after the tea is first brewed, early English families employed the tea cosy- a stuffed fabric covering, much like a hat, that slides over the teapot. Often adorned with log cabin motifs or lace in the early 1900s, the modern tea cosy has come back into fashion with the rebirth of loose leaf tea.

The next time you’re arranging your teapot with some delicious tea to be shared with colleagues, you can present your knowledge to them and let them know too that there’s more to the simple teapot than meets the eye.