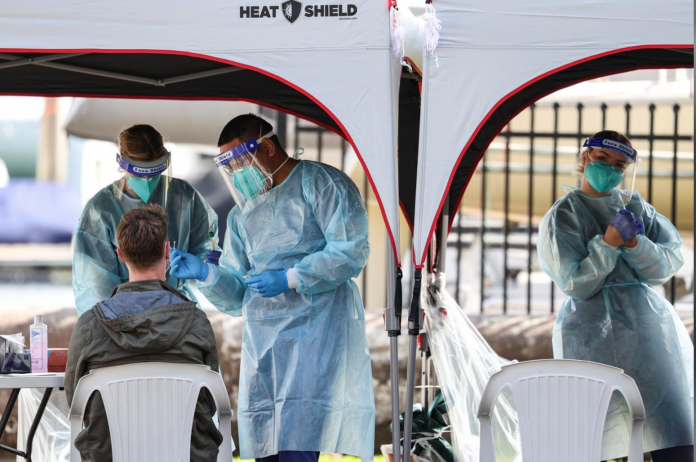 Australia recorded its deadliest day in the coronavirus pandemic on Thursday with at least 13 deaths and more than 700 new infections mainly in Victoria state, where the government ordered all residents to wear face-coverings outside.

The toll takes the country’s total fatalities from the novel coronavirus to 189, more than half of which have occurred in the second-most popular state of Victoria and its capital Melbourne, Prime Minister Scott Morrison said.

Australia had prided itself on rapidly containing the initial COVID-19 outbreak but a second wave which began in Victoria last month has forced Melbourne back into lockdown and sparked outbreaks in other areas including Sydney.

“We’ve now been in this lockdown (in Melbourne) for some weeks and we are not getting the results we would hope for, and as a result the further measures that are taken are certainly necessary,” Morrison told reporters, backing the restrictions announced by the Victorian government.

“On some days the virus wins, on other days we beat it. But I think we’ve got to be careful not to slip into some idea that there’s some golden immunity that Australia has in relation to this virus.”

Further restrictions on movement would deal a blow to the economy which is already in its first recession for 30 years, but failure to control the latest outbreaks would do more economic harm in the long run, Morrison added.

Victorian Premier Daniel Andrews said everyone in the state of more than 6 million people would be required to wear a mask when outside from Sunday, widening a requirement already in place in Melbourne.

He also extended social distancing restrictions, with residents in communities southwest of Melbourne no longer allowed to have visitors to their homes from late Thursday.

Cafes, pubs and restaurants would be allowed to stay open, however, because these were controlled environments where social distancing rules could be enforced.

“Having friends over to your house is not a controlled environment,” Andrews said.

The previous record daily count of new infections in Australia was 518 reported on Monday. The country has confirmed a total of 16,298 cases since the pandemic began.

Andrews said that while the latest spike in cases was concerning, the majority of them were at known hotspots such as aged-care homes and the number of untraceable infections was “much smaller”.

Northeastern Queensland state, which had effectively eliminated the virus, said it had found three new cases, two of whom were believed to have contracted COVID-19 while in the NSW capital Sydney. Queensland closed its borders to people from Sydney on Wednesday.

Queensland police allege that two 19-year-old women who brought the virus into the state after returning from a trip to Victoria had falsified travel documents and lied to authorities about their movements.

Both now faced criminal charges but one was continuing to refuse to tell officials where she had been, amid a spike in cases south of Brisbane where the pair reside.

“They went to extraordinary lengths to be deceitful and deceptive and quite frankly criminal in their behaviour and that is what has put the community at risk,” Queensland Police Commissioner Katarina Carroll told reporters.

Queensland earlier this month denied entry to anyone who had been to Victoria in the previous 14 days.