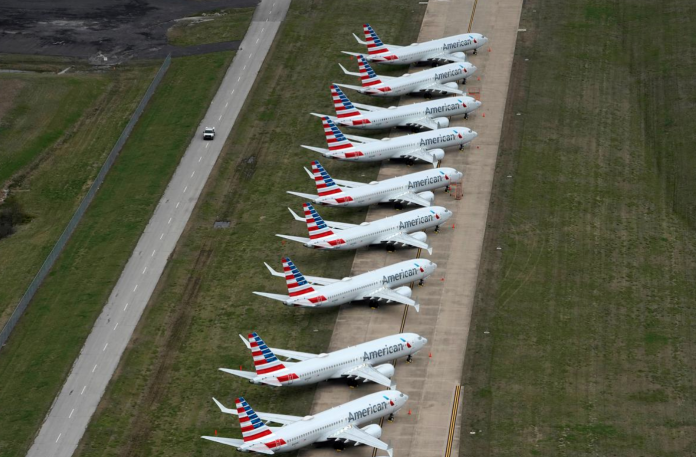 American Airlines (AAL.O) said on Wednesday it is sending 25,000 notices of potential furloughs to frontline workers and warned that demand for air travel is slowing again as COVID-19 cases increase and states re-establish quarantine restrictions.

In a memo to employees released on Wednesday, American said the notices are tied to the overstaffing it expects in October when U.S. government payroll assistance expires.

American, with more than 130,000 employees in 2019, had already warned that furloughs would be hard to avoid as pandemic-hit revenue remains more sluggish than the airline had hoped.

Overall, American expects to be overstaffed by about 20,000 in the fall, but hopes to reduce the actual number of furloughs through enhanced leave and early-departure programs it has rolled out alongside unions, Chief Executive Doug Parker and President Robert Isom said in the memo.

They noted, however, that if Congress passes another round of payroll support through March 31, the need for involuntary furloughs at that time would be “much less throughout the industry” because “there would most certainly be more demand for air travel.”

Unions representing aviation workers have asked lawmakers for another $32 billion in payroll aid to keep hundreds of thousands of workers employed for another six months past October. Airlines are not opposed to the idea but so far have not actively lobbied for it.

Delta Air Lines Inc (DAL.N) said this week it believed it could avoid furloughs after about 17,000 employees signed up for early-departure deals.

United Airlines (UAL.O) has sent 36,000 furlough notices, representing about 45% of workers, and Southwest Airlines (LUV.N) has also warned that job losses will be hard to avoid.

After boosting summer flying following some signs of pent-up leisure demand in May and June, some airlines are now scaling back their schedules due to a surge in COVID-19 cases across the country.

The U.S. outbreak has prompted several countries to impose travel restrictions on Americans. The European Union excluded the United States from its “safe” travel list.

Both Canada and Mexico want to extend the ban on non-essential travel at U.S. borders.

Even within the United States, Americans from 22 states are required to self-quarantine for 14 days if they enter New York or New Jersey, two states that have managed to curb infections.