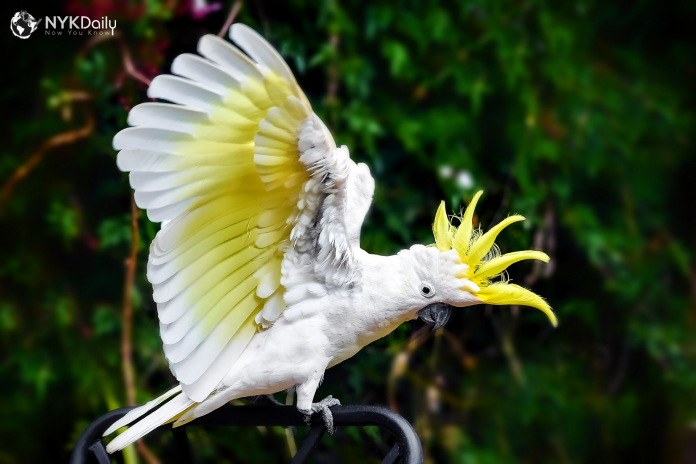 The white Cockatoo, also known as the umbrella cockatoo, is a medium-sized all-white cockatoo endemic to the tropical rainforest on islands of Indonesia.

Here are a few facts of these remarkably adorable love birds

Habitat: These cockatoos are observed in the North Moluccas of the Maluku province of Indonesia. They live on the islands of Kasiruta, Becan, Halmahera, and Mandioli. They have been seen on other islands, but they are assumed to have been distributed to these areas as escaped captive populations.

Behavior in the wild: Umbrella Cockatoos are seen alone, in pairs, and flocks of up to a dozen birds. Before the sunset, they assemble in groups of up to fifty birds to roost for the night in tall trees. Although they are social, except mating pairs they usually do not form close bonds. As a result, there is no substantially defined order of dominance in the community. They are diurnal and tend to be sedentary, although some may be nomadic and fly in search of food. This habit enables them to play an essential role in their habitat by helping to produce the forest. Because not all of the seeds eaten are digested, many are transferred in the bird’s tummy over new areas of the woods.

Tender personality -Known for their large-hearted affection and capacity to bond with humans, they are often rightly described as cuddly. They love physical contact with their humans (in captivity) and need love several hours each day to stay emotionally healthy. They are ideal companions for someone who has a lot of daily time and energy to dedicate.

Cuteness: Their snowy white feathers make an excellent and striking contrast to their dark beaks and eyes and gray or black feet. In-flight, they are like sunshine as they show the underside of their feathers that are yellow. Their most fantastic feature is their crest. Usually, it is kept flat on the head, but when extended, it forms a half-circle of gorgeous feathers above their head, similar to an umbrella. They are exquisite creatures, whether they are flying or perched on your finger.

Hyperactive: These parrots are incredibly bright and curious birds. They can use tools such as a branch to prick their backs. Birds in captivity need nearly regular mental stimulation. They are continually climbing and moving. In captivity, birds with too little mental stimulation often become sick, plucking their feathers to baldness.

Diet: They eat fruits, nuts, berries and seeds, occasionally insects, and possibly small lizards. They tend to feed on the tops of large trees, but will sometimes hunt in a lower story of the forest to be less noticeable to predators.

Lifespan: Umbrella Cockatoos can live over four decades in captivity and 30 years in the open. There have been cases of cockatoos living up to 90 years, though these claims have not been confirmed.