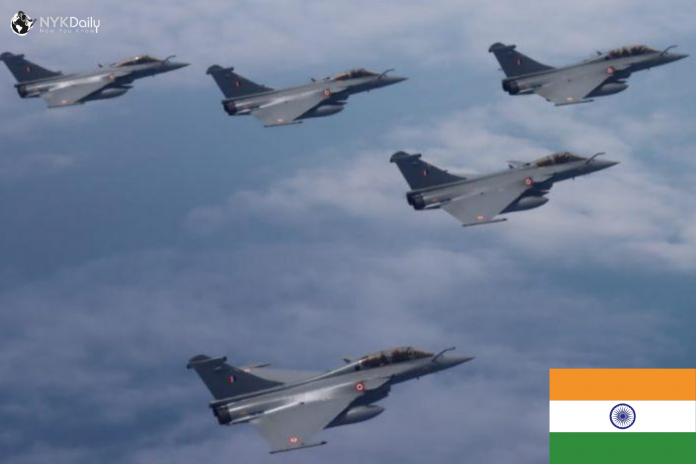 Five of the 36 medium multi-role Rafale fighter jets built by French aircraft manufacturer Dassault landed safely at the IAF airbase in Ambala on Wednesday afternoon. Significantly, the frontline IAF airbase is likely to be used in case of conflict at the northern or the western borders.

Defence Minister Rajnath Singh said in a tweet, “The Birds have landed safely in Ambala.”

“The touchdown of Rafale combat aircraft in India marks the beginning of a new era in our Military History. These multirole aircrafts will revolutionise the capabilities of the @IAF_MCC,” the minister added.

Of the two squadrons of the Rafale fighters, one would be based in Ambala for the western borders in Pakistan, while the second squadron would be based Hasimara in West Bengal and will be dedicated for the China border where Indian and Chinese People’s Liberation Army troops are engaged in a border standoff, which left 20 Indian and unknown number of Chinese soldiers dead following a bloody clash on June 15.

The five Rafale jets joined the Indian Air Force on Wednesday and the ones to follow after this will not have the India specific changes that make them more lethal and potent.

The Defence Minister thanked the French Government, Dassault Aviation and other French companies for ensuring the timely delivery of the aircraft and its weapons, despite severe restrictions posed by the Covid-19 pandemic.

He pointed out that the aircraft have very good flying performance and their weapons, radar and other sensors and electronic warfare capabilities are among the best in the world.

“Its arrival in India will make the IAF much stronger to deter any threat that may be posed on our country,” he tweeted.

India finds itself stretched between the borders with China, where it is locked in an intense standoff, and also with Pakistan, where it is countering incessant cross-border firing from a hostile Pakistan army.

Rajnath Singh also said that those who want to threaten India’s territorial integrity should be worried about the new capabilities of the Indian Air Force.

The minster also said that the Rafale jets were purchased when they fully met the operational requirements of the IAF. He also rebuffed allegations of getting the Rafale jets by paying dearly to France.

He said, “The baseless allegations against this procurement have already been answered and settled.”

Prime Minister Narendra Modi tweeted a video of the first set of Rafale aircraft landing on Indian soil with a Sanskrit phrase where he welcomed their arrival and connected it to “rashtra rakshaa” or national defence.

The ruling Bharatiya Janata Party (BJP) also retweeted it. Interestingly, the BJP had used the same Sanskrit phrase with an additional statement in English that read, “A Terror Free Resurgent India”, in a tweet from its official handle last year in February when the Rafale purchase issue had created a massive political storm ahead of the 2019 general election. The party had also used the hashtag, ‘For the first time’, as a dig at previous governments, back then.

The Sanskrit phrase talks about “rashtra raksha” or national defence. If loosely translated, it means, “I don’t see any ‘punya’, ‘vrat’ or ‘yagya’ like that of a nation’s defence”.