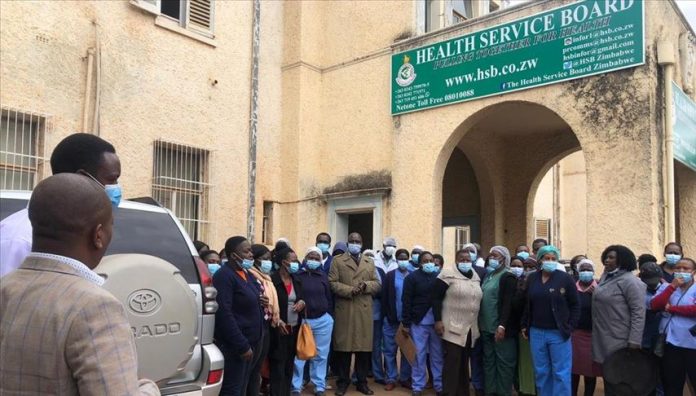 Zimbabwe raised salaries for government workers by 50% on Wednesday, hours after nurses stopped work at a major government hospital in the capital Harare, demanding to be paid in dollars because of soaring inflation.

Workers fear the country is returning to the 2008 era when a bout of hyperinflation rendered salaries and savings worthless. The government brought back the Zimbabwe dollar last June.

Finance Minister Mthuli Ncube said in a statement the salary hike would take immediate effect, adding that workers would also get a monthly allowance of $75.

Inflation has risen to 785%. The price of bread and sugar increased by at least 30% this week alone.

Nurses began their protest despite concerns about the impact on Zimbabwe’s fight against COVID-19, which has infected 401 people and killed four in the southern African country.

Anti-riot police blocked the entrance to Parirenyatwa Hospital in Harare as hundreds of nurses picketed inside.

Zimbabwe Nurses Association secretary general Enock Dongo told us that the least-paid nurses were earning a net monthly salary of 2,000 Zimbabwe dollars and warned that the boycott could continue beyond Wednesday and spread to other hospitals.

The Zimbabwe dollar is fixed at 25 to the U.S. dollar but trades at around 80 on the black market. Businesses calculate prices using black market rates.

Central bank governor John Mangudya said in a statement it would introduce an auction system from June. 23 to improve transparency in foreign currency trading.

The move is meant to remove the discredited fixed exchange rate that exporters say disadvantages them and makes the cost of business more expensive.

Mangudya said individuals and companies would be allowed to make a single bid of up to a maximum of $500,000 per auction.