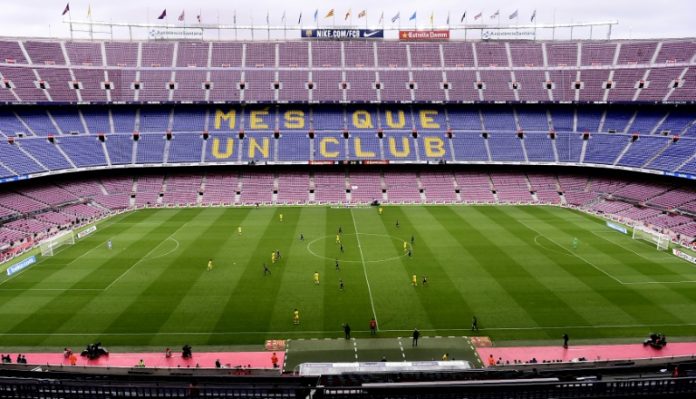 “I’ve missed this place,” Lionel Messi said after stepping onto the Camp Nou grass for the first time in three months but when Barcelona return to action he knows it will not be the same.

Instead, La Liga’s frenzied title race will take another step into the unknown as Barca run out into the biggest and now emptiest stadium in Europe after Real Madrid switch to a different home altogether.

Two points separate Spain’s greatest rivals ahead of the return to top-flight games on Thursday, when the derby between Sevilla and Real Betis will end a 93-day hiatus and launch a five-week sprint to the finish.

When games were suspended on March 12, Madrid had handed first place back to Barcelona, just after beating them at the Santiago Bernabeu, a seemingly significant shift in momentum that lasted exactly a week.

Given the many frailties of the two teams, few could predict who will emerge the stronger from the final 11 games of the season but a fresh factor will be who adapts better to strange surroundings.

Instead of their 81,000-capacity stadium in the city-centre, under renovation this summer, Real Madrid will play at the 6,000-seater Alfredo di Stefano Stadium, usually the home of the club’s reserve and under-18 teams, at their training ground in the northern suburbs.

Barcelona, meanwhile, will trade the advantage of Europe’s largest home crowd for the challenge of its most empty arena, where the absence of fans will, in numerical terms at least, feel starker than anywhere else.

“It’s the first time we have to play games without the fans,” said Madrid’s Toni Kroos earlier this month. “The team that adjusts best to this situation is the one that will win.”

For Barca, it will not be the first time.

Lionel Messi, Luis Suarez, Sergio Busquets, Gerard Pique, Sergi Roberto, Jordi Alba and Marc-Andre ter Stegen all played against Las Palmas in October 2017, when the club closed its doors at Camp Nou in protest against the game going ahead amid political unrest.

They won 3-0 but while that was a one-off, this time there are five home games to navigate, including Atletico Madrid, who would be more easily overcome with the help of a crowd.

Leganes and Espanyol, sitting 19th and 20th respectively, may feel emboldened too.

“I love that connection with the fans, it’s what allows us to feel those moments of happiness, to live them,” said Barca’s Arturo Vidal. “But we will have to adapt.”

On Saturday, the team held their first full training session at Camp Nou in almost seven years and Real Madrid have been trying to acclimatise too, with Zinedine Zidane overseeing regular meetings at their new ground.

The pitch replicates exactly the 105 x 60-metre measurements of the Bernabeu while the club’s groundsman, Paul Burgess, has been moved over to work on the surface.

But innovations are needed, with the club having to improve the lighting for broadcasting, add advertising boards and install the technology for VAR.

For Zidane, the setting is familiar because he led Madrid’s reserve side, Castilla, for 28 games there before taking charge of the first team. He even made his last appearance there in a Real Madrid shirt, to open the stadium in 2006.

Yet six home games against Eibar, Valencia, Mallorca, Getafe, Alaves and Villarreal offer no guarantees and, unlike Barcelona’s opponents, those teams will not even feel an historic anxiety.

“Personally, I would prefer to play at the Bernabeu,” said Ramos.

If home advantage is less certain, Barcelona could suffer most. They have collected the most home points so far in the division and nine more than Real Madrid.

But if they find away points are easier to collect, Barcelona have more room for improvement than Real. The unknowns make an erratic title race even more unpredictable.