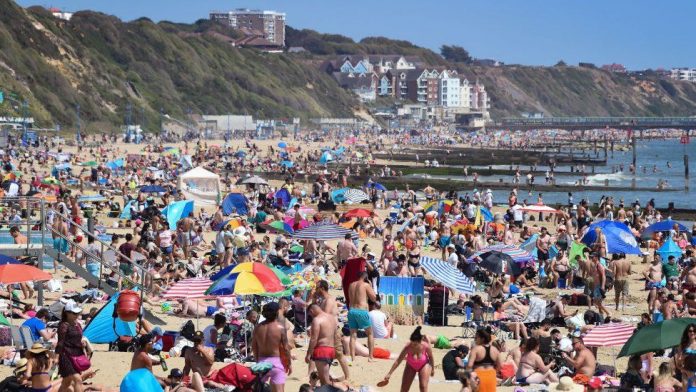 UK Health Secretary Matt Hancock has warned that the government will close beaches if people continue to ignore social distancing amid the coronavirus pandemic, it was reported on Friday.

A major incident was declared in Bournemouth on Thursday after thousands ignored health advice, with widespread anti-social behaviour, gridlocked roads and huge crowds on the hottest day of the year, the Metro newspaper reported.

Bournemouth East MP Tobias Elwood said 500,000 visitors were in Dorset on Thursday, almost as many people as living in the county.

Responding to the incident, Hancock said in a radio program on Friday that he wanted everyone to enjoy the sun, but the British people “mustn’t throw away” all the hard work they have done to fight the pandemic.

Reminding listeners that the government could shut down beaches completely, he said: “We do have that power. I am reluctant to use it because people have had a pretty tough lockdown and I want everybody to be able to enjoy the sunshine.

“But the key is to do it with respect for the rules  stay with your household, stay a good distance from other households.

“But we do have those powers and if we see a spike in the number of cases then we will take action.”

Health officials described scenes in Bournemouth as “appalling”, as services were completely overstretched, workers received abuse and a number of fights involving drunken behaviour were reported.

Bournemouth, Christchurch and Poole council said extra police patrols had to be brought in, with pictures also showing the large amount of rubbish left on the beach by revellers.