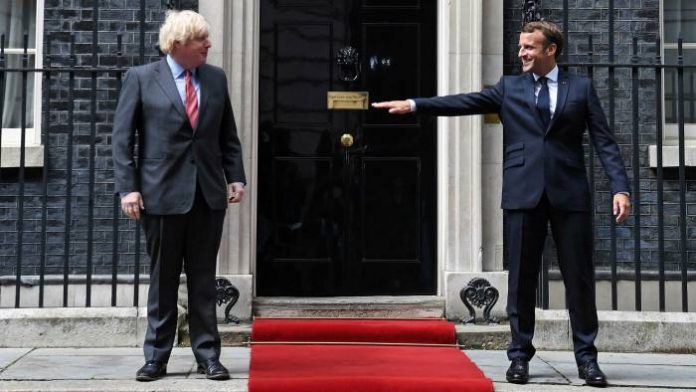 UK Prime Minister Boris Johnson and French President Emmanuel Macronhave said that the “alliance” between their two nations will be “crucial in overcoming the coronavirus pandemic”.

Macron on Thursday arrived in the UK for the commemoration of a crucial message in French history: the “Appel” radio broadcast sent in 1940 by General Charles de Gaulle over the BBC for France to resist the Nazi occupation of Europe, reports Efe news.

In addition to recalling that historic moment during a meeting at Johnson”s official residence at 10 Downing Street, the two men reviewed issues of common interest, including the ongoing COVID-19 crisis.

The two leaders agreed that “the partnership” between France and the UK “will be crucial in overcoming the coronavirus pandemic and ensuring the global recovery is green and sustainable”, an official spokesman confirmed regarding the meeting.

On that subject, Johnson “welcomed the agreement to intensify talks in July and underlined that the UK does not believe it makes sense for there to be prolonged negotiations into the autumn”, the Prime Minister said in his statement after meeting with Macron.

The French leader, meanwhile, told Johnson that he still supports striking a deal on Brexi.

The two leaders also recalled the sacrifice made by British and French civilians and troops in the Second World War as well as the ongoing strength of the French-British relationship, which was ostensibly the reason for Macron”s visit to London during which he was exempt from the otherwise mandatory 14-day quarantine the UK is imposing on all international visitors to prevent the spread of the coronavirus.

At 10 Downing Street, the two leaders viewed artifacts and documents from the World War Two era during which De Gaulle was in London and discussed his relationship with Britain”s then-prime minister, Winston Churchill.

Johnson presented Macron with a “collage” featuring a telegram sent by De Gaulle to Churchill on Victory in Europe Day, when the Allies accepted the unconditional surrender of Nazi Germany, according to a spokesman.

That message included the response of the British leader as well as a photograph of the two men in Paris taken shortly after the Liberation.

Johnson also presented to Macron a miniature replica of the Land Rover Defender to accompany the model of De Gaulle”s car, a Simca Chambord, that adorns Macron”s office.

As part of the official agenda for Macron”s visit, the French leader was also received by Crown Prince Charles and his wife, Camilla Parker-Bowles, the Duchess of Cornwall, at Clarence House, from where they travelled to view the statues of King George VI and his wife Elizabeth, the parents of Queen Elizabeth II, and the statue of De Gaulle.

In an emotional speech, Macron thanked the UK for its support during the war against the Nazis and said that 80 years ago, on June 18, 1940, the UK gave France its first weapon in that fight, the microphone of the BBC to send the important “Appel” message to his countrymen on the continent after the Nazi occupation of France in early 1940.