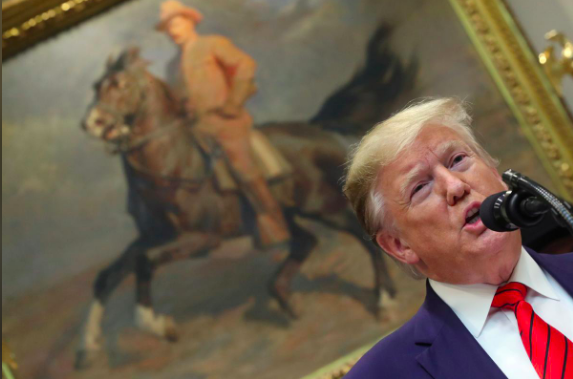 U.S. President Donald Trump and his fellow Republicans in Congress on Tuesday angrily decried efforts to remove statues and other memorials that activists consider racist, a movement that has gained momentum as part of wider national protests over racial injustice and police brutality.

Trump early on Tuesday announced an authorization “effective immediately” to arrest anyone caught destroying or vandalizing a commemoration to a former member of the armed services on federal land, citing the Veterans Memorial Act, which has been law for 17 years.

He first threatened arrest late Monday night when protesters tried and failed to topple a statue of former President Andrew Jackson near the White House. Jackson enslaved Black people as a plantation owner and is remembered for the Trail of Tears, a forced removal of Native Americans from the south that led to the death of thousands.

Protesters also declared a Black House Autonomous Zone across the street from the White House in front of St. John’s Church, taking over Black Lives Matter Plaza. They spray painted “BHAZ” on columns in front of the church, which had a small basement fire during earlier protests.

“Perpetrators must be prosecuted. These senseless attacks must be stopped,” Kevin McCarthy, the top Republican in the U.S. House of Representatives, said on Twitter.

Many of the statues and monuments targeted by crowds in recent weeks pay homage to the rebel Confederacy from the nation’s Civil War. Democrats and other critics say such symbols wrongly honor those who perpetuated slavery.

Calls to take them down follow a wave of protests after the May 25 death of George Floyd, an unarmed Black man killed in police custody in Minneapolis, that has sparked ongoing demonstrations and calls to address racism in policing and other reforms.