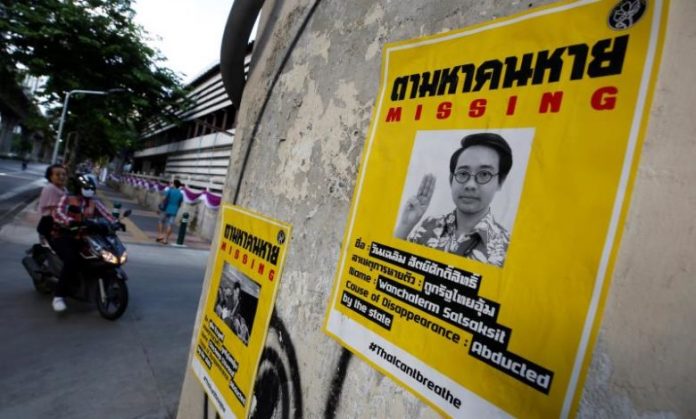 The disappearance of a Thai dissident living in self-exile in Cambodia after his reported violent abduction in broad daylight in Phnom Penh has sparked outrage in Thailand along with a wave of criticism against the government.

Wanchalearm Satsakit, 37, who fled to Cambodia after the 2014 coup, was last seen on June 4 in CCTV footage that shows a group of unknown armed men shoving him into a black vehicle in the centre of the Cambodian capital while he was talking on the phone to his sister, reports Efe news.

The last words that Wanchalearm”s sister heard him say before his disappearance were the same ones that became a global protest symbol after being uttered by African-American man George Floyd as a police officer fatally knelt on his neck in the city of Minneapolis: “I can”t breathe”.

The incident in Cambodia was first brought to light by non-profit Human Rights Watch, and soon Thai social networks were filled with condemnation and the hashtag #SaveWanchalearm began trending on Twitter.

Small demonstrations were also held in front of the Cambodian embassy in Bangkok and other parts of the capital.

Meanwhile both Thai and Cambodian authorities were yet to comment on the issue.

Since the coup, at least eight activists have disappeared under circumstances that have led to rights groups terming them forced disappearances, and the mutilated dead bodies of two of them were found later in a section of the Mekong river between Thailand and Laos.

The government of Prime Minister Prayut Chan-ocha, who headed the 2014 coup and won last year”s election, has denied any connection to the disappearances of dissidents abroad.

Wanchalearm, like many other Thai dissidents in exile, had been critical of the government and the monarchy, and his case has reignited the debate on Thailand”s lese-majeste law, one of the harshest in the world, with many netizens calling for its abolition in recent days.

However the use of this law has dropped since King Maha Vajiralongkorn ascended the throne in 2016, after the death of his father, the revered King Bhumibol Adulyadej, at the insistence of the monarch himself.