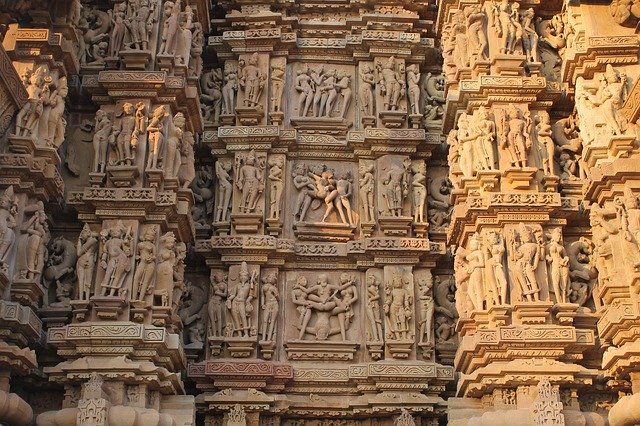 Khajuraho, also recognized as the Land of Moon God is one of the best-known tourist places in Central India. This favorite destination of tourists in Madhya Pradesh was once the capital of Chandela Rajputs. Khajuraho or Khajirvahila means the garden of dates. This historic land located in Chhatarpur district beholds a good number of Hindu and Jain temples. Today, Khajuraho is one of the UNESCO World Heritage Sites. Amazing carvings and architecture of buildings in this temple town is a fine example depicting the Indian of construction. The annual dance festival conducted in the Khajuraho temple attracts thousands of tourists from all over the world. Beautiful carvings seen inside the inner sanctum of Khajuraho temples are spectacular.

Parsvanath temple, built during the reign of Dhangadeva is an extraordinary tourist place here. You can watch here wonderful stone carvings depicting the images of God. It is a well known Jain temple coming under the group of Eastern group of temples in the Bundelkhand region of Madhya Pradesh. Lakshmana temple built by king Yasorvarman is another beautiful tourist stop promoting Khajuraho tourism. The alluring architecture of this stone temple dedicated to Lord Vishnu presents a fabulous view for visitors. Studies say that the statue was presented to king Yasorvarman by Devapala. Chausath Yogini temple devoted to 64 Yoginis is another attractive tourist spot promoting Khajuraho tourism. This aged temple built in 900 AD is considered as the oldest surviving temple in Khajuraho. Chitragupta temple, Vishwanath temple, Devi Jagadhamba temple, Ghantai temple, Adinath temple, Chaturbhuj temple, and Duladeo temple are other temples worth exploring. .

Panna National Park settled on the banks of river Ken is one of the most widely visited tourist places in Khajuraho. Park stretches over 546 km in the area and carries a rich collection of wildlife species. It is one of the favourite destinations of zoologists and ornithologists. Sambars, chinkaras, and boars are some of the few living species found in this national park. Majhgawan Diamond Mines and Raneh Falls are two nearby tourist places to Panna National Park intensifying Khajuraho tourism. Khajuraho is also furnished with historic museums like Archaeological museum and Dhubela museum housing ancient weapons, historic sculptures, and traditional paintings. Pandava waterfalls with beautiful landscape located on Ken River presents a panoramic view for tourists. This tourist place in Khajuraho, located 32 km away from Khajuraho city dedicate a breathtaking view for tourists.

Majestic Ajaigarh and Kalinjar Forts, Bandhavgarh National Park, Rewa Palace, Beni Sagar Dam, and historic Jain temple exhibiting 24 Tirthankaras are other best-known tourist places around Khajuraho. Marvelous carved stones and sculptures seen in Khajuraho temples depict the great artistic talents of Chandelas. Out of 85 temples in Khajuraho, only 22 are remaining today. Khajuraho, standing as a symbol of ancient heritage is a perfect choice for your tour trip.