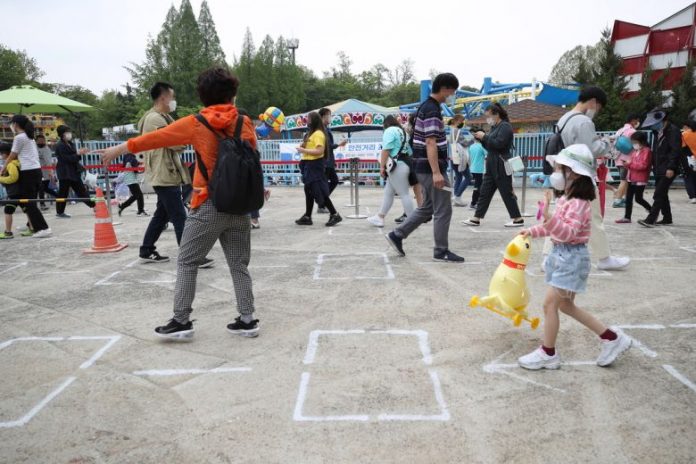 South Korea on Friday reported 56 new COVID-19 cases, with most of them in the Seoul metropolitan area, forcing health authorities to indefinitely extend toughened infection preventive measures in the densely populated capital area.

The 56 new cases, including 43 local infections, raised the total caseload to 12,003, according to the Korea Centers for Disease Control and Prevention (KCDC).

Of the locally transmitted cases, all but one were reported in Seoul and surrounding areas.

The accumulated number of patients in Gyeonggi province that surrounds the capital city surpassed the 1,000 threshold.

South Korea eased its strict social distancing guidelines on May 6 on the back of the flattened virus curve, with phased reopenings of schools starting in mid-May.

The relaxed social distancing guidelines, however, have been in peril as a group of clubgoers from a nightlife district in Seoul were confirmed to be infected with COVID-19.

A string of cluster infections tied to religious gatherings, a distribution center and sports facilities has also popped up.

Late last month, the country implemented a two-week tougher virus prevention guidelines for the metropolitan area that is home to half the country”s population of 50 million.

Harried by a spike in cluster infections, health authorities opted to indefinitely extend the deadline previously set for Sunday, as a whopping 97 per cent of locally transmitted cases have been reported in the metropolitan area this month.

The measure will be in place until the number of new cases falls back to a single digit, they added.

“If the number of new cases do not slide to a single-digit level, we will consider moving on to the next step to enforce a strict social distancing scheme,” we quoted Health Minister Park Neung-hoo as saying during a briefing.

Park urged residents in greater Seoul to stay home as much as possible.

Meanwhile, the death toll increased by one to 277, with the fatality rate reaching 2.31 per cent.