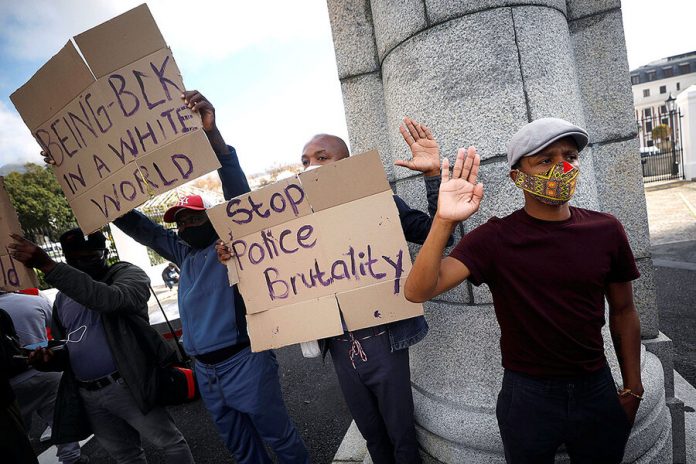 As the killing of George Floyd sparked protests worldwide, South Africans joined calls on Tuesday for action against police brutality following the deaths of at least 10 black people at the hands of law enforcement under a coronavirus lockdown.

Thousands have attended Black Lives Matter demonstrations in Cape Town, Pretoria and Johannesburg to protest violence by security forces implementing the lockdown – and prior to the pandemic – directed mainly at poor, black communities.

“This brutality and violence is not at all new. What is new is that during this lockdown, a harsher spotlight has been shone on these abuses,” said Thato Masiangoako, a researcher for the Socio-Economic Rights Institute of South Africa.

South Africa remains one of the most unequal countries in the world, according to the World Bank, more than two decades after the end of white minority rule, with urban areas starkly divided along racial lines.

More than 42,000 complaints were made about the police between 2012 and 2019, including rape, killings and torture, according to the Independent Police Investigative Directorate (IPID), the police watchdog.

“It must be noted that there is a difference between the use of force and police being brutal,” said police spokesman, Vish Naidoo.

“The cases which IPID is investigating must all be contextualised … and allowed to be concluded before people draw conclusions,” Naidoo said in comments on WhatsApp.

Protesters outside Johannesburg’s constitutional court on Sunday carried placards with the names of Collins Khosa, who died in nearby Alexandra township on April 10, and of Floyd, the black American who died after being knelt on by a white officer.

Khosa died after soldiers entered his home and beat him with a rifle after seeing in his yard a cup of what they said was alcohol, sales of which are banned during the lockdown, according to his lawyer, Wikus Steyl.

“We have suspended members of the defence force who were allegedly involved with this,” Siphiwe Dlamini, an army spokesman told us.

The High Court last month ordered the suspension of soldiers and police officers who were at or near Khosa’s home at the time of his death and ordered the government to set up a mechanism to enable the public to complain about abuses.

The South African Human Rights Commission, an independent watchdog, said it is closely monitoring IPID’s investigation of at least 10 deaths at the hands of law enforcement since lockdown began on March 27.

“COVID-19 has opened up the brutal inequality in South Africa. There is great divide between races and classes but we still hope that change will come,” said Chris Nissen, one of its commissioners.