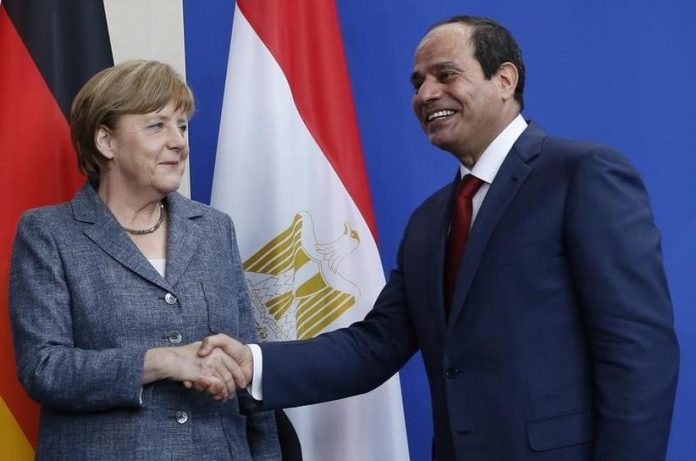 During a phone call on Monday, Sisi and Merkel exchanged views about the latest developments of the Libyan situation in the light of the Egypt-sponsored initiative for peace in the North African country, said Bassam Rady, Egyptian presidential spokesman, in a statement, Xinhua news agency reported.

Sisi reaffirmed Egypt”s readiness to reach a comprehensive political settlement in Libya through the recently proposed initiative to achieve stability and security in Libya.

Egypt is keen to preserve the resources of the Libyan people as well as putting an end to illegal foreign interventions that aggravated violence in the country, he added.

According to the spokesman, Merkel welcomed the initiative, which she viewed as “an extension of the Berlin conference path with new effective elements and dimensions to the Libyan political process.”

The German chancellor also praised the Egyptian efforts to reach a settlement to the conflict in Libya, the spokesman said.

Libya has been locked in a civil war since the ouster and killing of former leader Muammar Gaddafi in 2011.

The situation escalated in 2014, splitting power between two rival governments: the UN-backed Government of National Accord (GNA) based in the capital Tripoli and a government in the northeastern city of Tobruk allied with the Haftar-led Libyan National Army (LNA).

Egypt, the United Arab Emirates, France and Russia support Haftar”s LNA, while the GNA is backed by Turkey and Qatar as well as Italy.