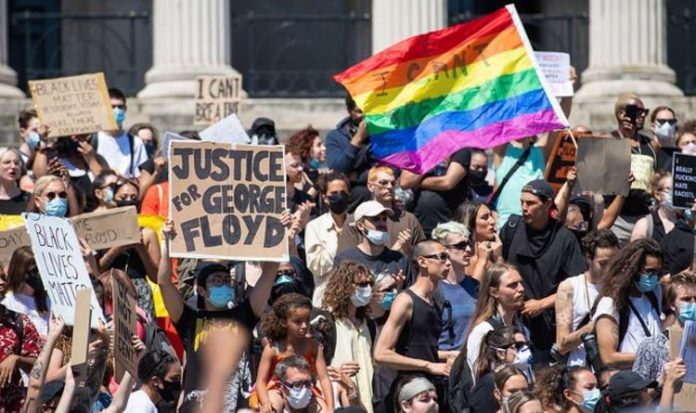 The Scotland Yard have released images of 35 people they want to speak to in connection with violence at the recent anti-racism protests in London.

Clashes have erupted between demonstrators supporting the Black Lives Matter movement and far-right activists who claimed to be protecting statues in the UK capital, the Metro newspaper reported.

On June 13, combination of football hooligans, veterans and far-right activists descended on the capital to “defend” the city”s statues, including one of Winston Churchill which was vandalised the previous weekend.

The Metropolitan Police said on Thursday that they were seeking people in relation to a number of violent public order offences between June 3 and 13.

Commander Bas Javid said while the vast majority of people had protested peacefully, “a small minority have attended with the sole purpose of attacking police officers, or violently confronting other protesters”.

He said almost 230 arrests have been made so far, 128 of which related to the June 13 gathering which saw far-right demonstrators attack police near the Palace of Westminster and Trafalgar Square.

“We are now asking for the public”s help in identifying people, who we need to talk to about the violence seen at the protests. If you have any information, no matter how small, please get in touch,” the Metro newspaper quoted Javid as saying.

The Met Police added that there was a “high likelihood” they will be releasing more images of others wanted in connection with the clashes “in due course”.

Ever since the May 25 death of the unarmed black man George Floyd at the hands of a white policeman in the US city of Minneapolis, anti-racism protests have been held in cities across the world.

After demonstrators in Bristol toppled a statue of slave owner Edward Colston, rolled it down the street and dumped it in the harbour, a fierce national debate has ignited over what to do with monuments of people who held racist views or played a part in colonialism, said the newspaper report.