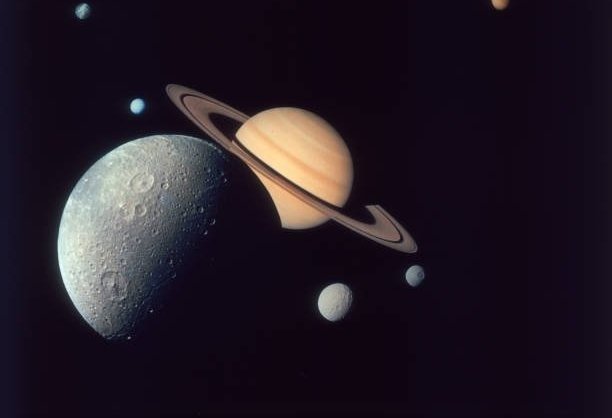 The findings, published in the journal Nature Astronomy, may help address an age-old question.

While scientists know that Saturn formed 4.6 billion years ago in the early days of the solar system, there”s more uncertainty about when the planet”s rings and its system of more than 80 moons formed.

Titan is currently 1.2 million kilometres from Saturn. The revised rate of its drift suggests that the moon started out much closer to Saturn, which would mean the whole system expanded more quickly than previously believed.

“This result brings an important new piece of the puzzle for the highly debated question of the age of the Saturn system and how its moons formed,” said lead author of the work Valery Lainey who conducted the research as a scientist at NASA”s Jet Propulsion Laboratory in Southern California before joining the Paris Observatory at PSL University.

As the moon orbits, its gravity pulls on the planet, causing a temporary bulge in the planet as it passes.

Over time, the energy created by the bulging and subsiding transfers from the planet to the moon, nudging it farther and farther out.

Our own Moon drifts 3.8 centimeters from Earth each year.

To reach their results about Titan, the scientists mapped stars in the background of Cassini images and tracked Titan”s position.

To confirm their findings, they compared them with an independent dataset: radio science data collected by Cassini.

During 10 close flybys between 2006 and 2016, the spacecraft sent radio waves to Earth.

Scientists studied how the signal”s frequency was changed by their interactions with their surroundings to estimate how Titan”s orbit evolved.