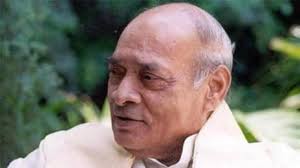 The Congress official handle said in a tweet: “We honour P.V. Narsimha Rao, a visionary leader who oversaw major economic transformations of the Indian economy. His contributions to the nation shall never be forgotten. Narasimha Rao had been Prime Minister from 1991 to 1996. Questions have often been raised that he has not been given due credit by the Congress party. Credited to be reform leader in the country and has been remembered to put India in world economic map,” the party said.

Rao ran a minority government which was mired in controversy. In 1992, he was blamed for the demolition of the Babri Masjid and not doing enough to save the disputed structure. During the last few years before he died in 2004, his relation with the Congress went downhill after Sonia Gandhi took over as party president and he was eventually sidelined. Rao’s term as Home Minister was also mired in controversy when he was blamed for the 1984 Sikh riots in Delhi.

Jitin Prasada whose father Jitendra Prasada was political secretary to Narasimha Rao tweeted: “Tributes to former PM #PVNarasimhaRao ji on his birth anniversary. My father worked closely with him as his political secretary and witnessed the course changing economic policies ushered in by Rao sahab which opened up the Indian economy and gave it a much needed impetus.”