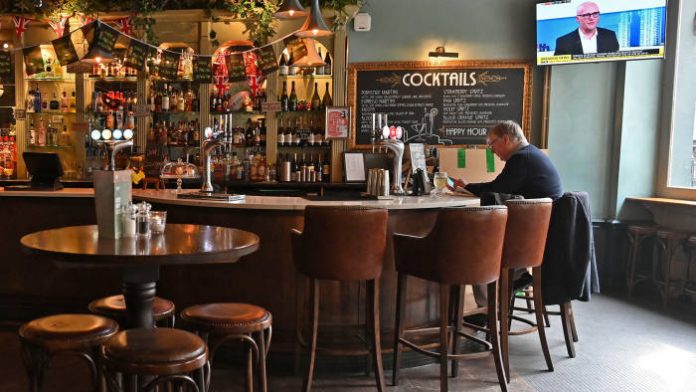 The UK government has been urged to revise the incumbent 2-metre social distancing rule to help bars and pubs sustain their business amid the COVID-19 pandemic.

Pubs and bars in England may be able to reopen in early July amid the government”s efforts to ease the lockdown, but “further safer working guidance” for these businesses was yet to be announced.

So as to help the industry survive health crisis, associations were calling on the government to review and revise ther social distancing guidelines.

“The industry has been given a glimmer of hope with July 4 as a target for the earliest possible date for the reopening of pubs. But sadly, if no reduction (on social distancing measures) is made before that, this could result in devastating pub closures and job losses in communities,” Emma McClarkin, chief executive of British Beer &amp; Pub Association (BBPA) told Xinhua in an exclusive interview..

According to the figures released by the BBPA, leading trade association representing brewers and pubs, the current social distancing rule means that only about a third of England”s pubs will be able to reopen.

“The biggest challenge we face right now, as a social environment that we have inside our pubs, is social distancing measures,” she said, noting the current 2-metre rule in the country will be “extremely difficult” for pubs to operate.

“No two pubs are the same, it”s why we love the great British pub — it”s full of character: nooks, crannies, small pinch-points which will make it extremely difficult for some of our pubs to operate under (the rule of) 2 meters,” said McClarkin.

She told Xinhua that the industry had been calling for the government to adopt the World Health Organization (WHO) guidance, which recommends keeping at least 1-meter social distancing.

According to BBPA”s estimations, it would allow around 75 per cent of England”s pubs to be able to reopen, and “would really get the pub economy going again”, if the social distancing measures could be reduced to 1 metre.

Some countries, like China, have adopted the 1-meter rule but made face masks mandatory in public places, while some others including Germany and Italy have a 1.5 meter rule.

But the UK, along with Canada and Spain, insists that people should keep a 2-metre distance.

The association released findings Thursday that overall sales of beer in the first quarter of 2020 were down by 7.2 per cent year-on-year to 1.5 billion pints, the lowest level since the record began two decades ago, as the industry is facing the biggest crisis ever.

Although pubs across the country have closed their doors during the lockdown period, some have found ways to adapt their business to serve communities.

A select number of Greene King pubs in London have launched a “pub grub” delivery and takeaway service for customers, which operates on a click-and-collect basis and has largely been successful. Due to this, the chain is looking to expand the service across the country.