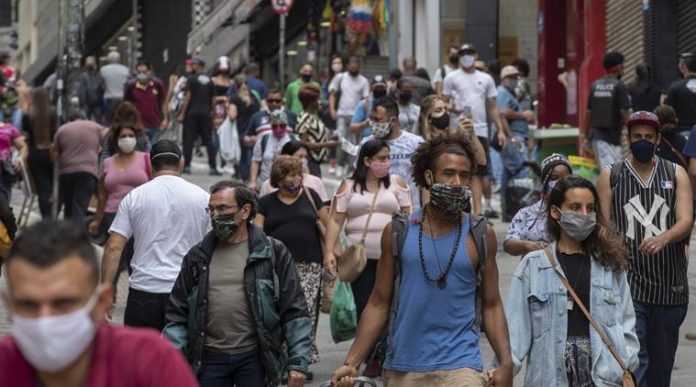 Protests for and against Brazilian President Jair Bolsonaro took place for a third consecutive Sunday in several cities of the country, in the midst of the uncontrolled coronavirus pandemic.

This Sunday”s demonstrations came as Brazil stands as the world”s second country with the most COVID-19 deaths (43,332) and infections (867,624) after the US, and with the majority of states and municipalities focused on reopening.

Protesters opposed to olsonaro, including social, anti-fascist and anti-racist movements, marched in Sao Paulo against what they called the President”s “genocidal policies” during the health crisis, and his “authoritarian” rhetoric.

Followers of the far-right leader, who described COVID-19 as just a “little cold” and claims to have the “people” and the Armed Forces on his side, gathered in Brasilia for the “closure” of Parliament and Congress, and a “military intervention”.

A few hundred supporters of the head of state gathered at the Army headquarters in Brasilia, with banners reading “SOS Armed Forces” ,”Military intervention with Bolsonaro in power” and “New anti-communist alliance”.

On the other hand, a group calling itself “300 for Brazil”, made up of about 30 ultra-right activists, occupied the dome of Congress on Saturday for a few minutes and at night launched fireworks against the Supreme Court.

Some Supreme Court judges, including its president, Jose Antonio Dias Toffoli, condemned the attack, while the Prosecutor”s Office announced the opening of another investigation.

Two weeks ago, the same group marched with torches against the Supreme Court, evoking the US” Ku Klux Klan.

In the city of Sao Paulo, the largest in Brazil, there were demonstrations both for and against Bolsonaro, although the latter had a greater attendance.

The president”s detractors, who also included anti-fascism fans of Corinthians and Palmeiras, Bolsonaro”s soccer team, met on Paulista Avenue and displayed a huge banner with the phrase “Fora Bolsonaro” (Bolsonaro out).

The participants, escorted by a strong police presence, also cried out against “the extermination of the black population,” the same weekend that two new episodes of police brutality occurred in Sao Paulo.