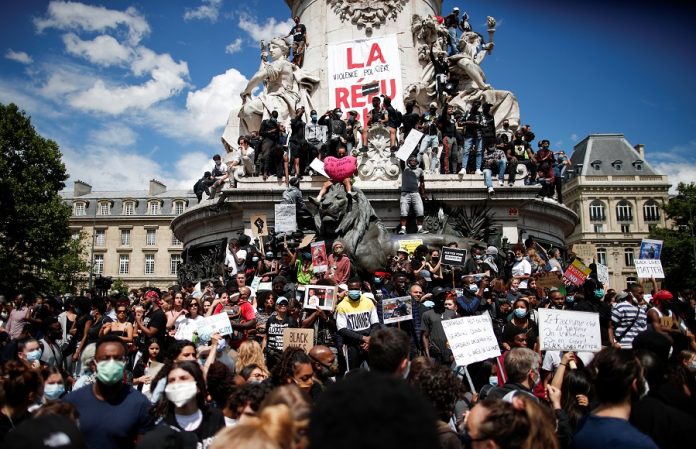 Despite a ban on public gatherings due to the coronavirus pandemic, tens of thousands of people took to the streets across France to protest against police brutality and racism.

On Saturday, several thousand people converged to the Republic square in central Paris, demanding “Justice for Adama Traore” — a 24-year-old who died in police custody four years ago in the French capital, reports Xinhua news agency.

The case, according to protesters, happened in circumstances similar to the death of the unarmed African-American man George Floyd on May 25 in the US city of Minneapolis.

Protesters also carried posters reading “Stop police violence”, “No justice, No peace” and “Remaining silent is to be an accomplice”.

“The death of George Floyd has an echo in the death in France of my little brother. My brother said the same thing as George Floyd — ”I can no longer breathe”.”

French state investigators had dismissed the charge of police brutality in Traore”s case, saying that the man died of heart failure due to pre-existing medical conditions.

While Floyd”s death triggered anti-racism protests around the world, the Traore case returned to the spotlight after a new probe commissioned by his family said the young man died of asphyxiation due to the technique police officers used during the arrest.

During the first round of national rallies on June 6, 23,300 people protested across the country, including 5,500 in Paris, according to the Interior Ministry.

Interior Minister Christophe Castaner vowed “zero tolerance” to police racism, stressing that “each suspicion must lead to an investigation and each mistake to a sanction”.

He announced that the chokehold arrest would be abandoned and no longer be taught in police and gendarmerie schools.

He also ordered to reinforce the use of body cameras.

Finding the racism allegations unjustified, police unions held their own protests across French cities on Friday.

Thousands of policemen walked out from police stations to demand an end of police “stigmatization”.