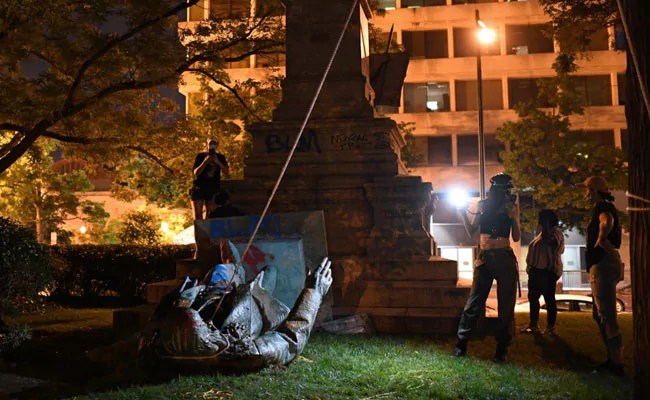 A group of protesters toppled down a 120-year-old statue of Confederate General Albert Pike in Washington D.C.

The protesters gathered in Judiciary Square around the statue of Pike reportedly at around 11 p.m. on Friday and tore it down 15 minutes later, reports Xinhua news agency.

The city”s only outdoor Confederate statue, after falling to the ground, was lit on fire before police officers arrived and extinguished the flames.

The incident took place came on Juneteenth, which commemorates the end of slavery in the US.

President Donald Trump lashed out at the Washington D.C. police for allowing the incident to happen.

“The D.C. Police are not doing their job as they watch a statue be ripped down and burn. These people should be immediately arrested. A disgrace to our cCountry,” he tweeted, tagging the city”s Democratic Mayor Muriel Bowser.

US states and cities have begun removing statues of Confederate figures amid a national reckoning over police brutality and racism sparked by the death of George Floyd.

Floyd, an unarmed 46-year-old African American man, died during an arrest in Minneapolis on May 25 after a white police officer kneeled on his neck for nearly nine minutes.

Floyd”s death has sparked weeks-long demonstrations across the country, as well as renewed calls from lawmakers and activists for the removal of monuments in memory of figures believed to be symbols of racism.

House Speaker Nancy Pelosi on Thursday requested the removal of portraits of previous House speakers who served in the Confederacy from display in the US Capitol.

Jeff Duncan, a Republican Congressman, on Friday urged Pelosi to reverse her order.

“Every leader in our country”s history has flaws and imperfections. Every single portrait or statue in the U.S. Capitol depicts individuals who have made mistakes or questionable statements by modern day standards,” Duncan wrote in a letter.

“I”m very concerned at the precedent Speaker Pelosi”s action sets, and that it will ultimately end with removing history.”