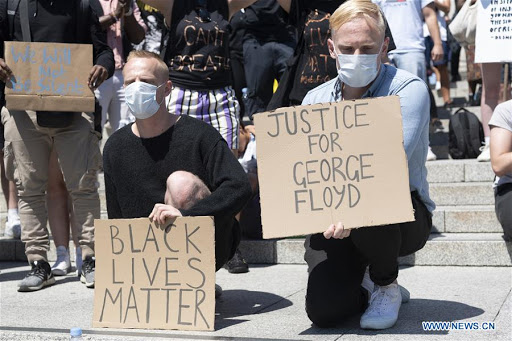 Despite a ban on mass gatherings in the UK, thousands of people gathered in London and Manchester to protest over the death of George Floyd, an unarmed African-American man, in police custody in the US city of Minneapolis on May 25.

Videos posted online showed people shouting “I can”t breathe” on the square. Taking to their knee, they also chanted “George Floyd”, as some of them held banners reading “Black Lives Matter”.

Protests were also held in Manchester and outside the US Embassy in London.

Meanwhile, London”s Metropolitan Police said that police were aware of demonstrators gathering outside the US Embassy.

“Officers are on scene &amp; engaging with those in attendance. An appropriate policing plan is in place,” it tweeted.

Protesters continued to take to the streets over the weekend in at least 30 US cities over the death of Floyd.

As many as 25 cities across 16 US states have imposed curfews while eight states and Washington D.C. have called on the National Guard to help respond to the unrest.

Nearly 1,400 people have been arrested during the protests in 17 US cities.