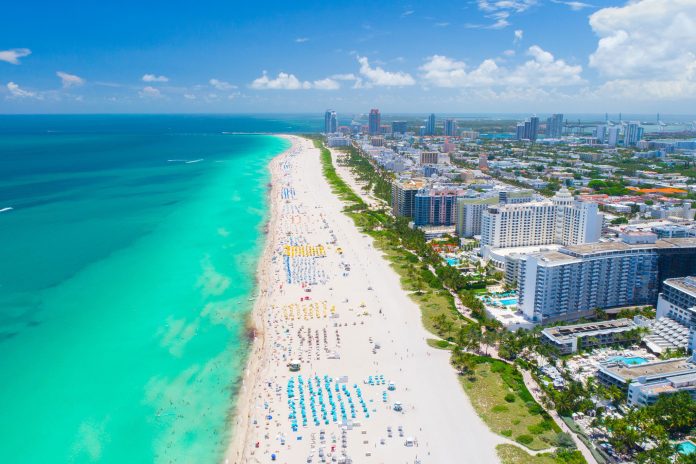 Tourists have started returning to Florida after lockdown, with hotels in Miami Beach welcoming them with open arms and strict hygiene measures.

Recovery is going to be slow and the holidaymakers who have come to the Sunshine State during the first phase of de-escalation have mainly come from elsewhere in the country.

Tourism is one of the most important economic engines and generators of employment in Florida and has been one of the hardest-hit sectors by the COVID-19 crisis.

Bernardo Naval, director of the Hotel Riu Plaza Miami Beach, says: “Recovering the figures we had before the pandemic will be difficult and will take months but what we have done has been to change the market.

“Before 90 or 80 percent were either European and South American and now we are concentrating on the local market, which is what will be feeding us in the coming months.”

The hotel, a 1950s building on the beachfront on the touristy Collins Avenue, reopened its doors last week for the first time in more than two months.

Before the pandemic there were 747,000 tourism-dependent jobs in Florida and it is estimated that more than 336,400 will be lost due to the impact of COVID-19, according to the American Hotel and Lodging Association (AHLA).

The organization warns that the effect of the outbreak will be nine times higher than the 11 September terrorist attacks in 2001.

Florida is no exception, although its hoteliers are trying to make the most of the state’s reopening.

Naval says: “A lot of people want to get away from their homes after several months of lockdown, enjoy the good weather and more in south Florida, which is the quintessential vacation destination in the United States.”

He adds that during the first days of the reopening the hotel will be at 10 percent capacity and that this figure will slowly increase to 50 percent in the coming weeks.

A quiet reception area and a swimming pool with 12 people keeping a distance from each other are evidence of the effects of COVID-19 on the hotel sector.

Security measures implemented by Floridian hotels include obligatory masks in common areas, except the pool, no buffet service in restaurants and a limited capacity in the rest of their services.

Visitors and staff have their temperatures checked at the hotel’s entrance.

The most striking difference is that the golden sands overlooked by the best rooms of Miami Beach’s luxurious hotels are deserted.

The popular beach has been closed to the public for months, giving guests at many hotels on Collins Avenue an unusual view.

For many of the city’s tourism businesses the reopening of the beaches will be a turning point as it will help to fill restaurant tables and hotel rooms.

Restaurants and cafes on nearby Ocean Drive, a popular tourist spot, have started to come back to life.

Marvin Torres, who works at the On Ocean 7 Cafe, says there have been hardly any foreigners and the clientele so far is “very local.”

“As an employee of this restaurant I’m glad because we have reopened, we are working… only a few customers have come but we are doing it little by little, tourism will grow and when the beaches reopen we’ll probably be better,” he adds.

Chip Rogers, AHLA president and CEO, warned in a letter to Congress in May that 2020 is predicted to be the worst year on record for hotel occupancy and the industry will not recover until 2022 at the earliest.