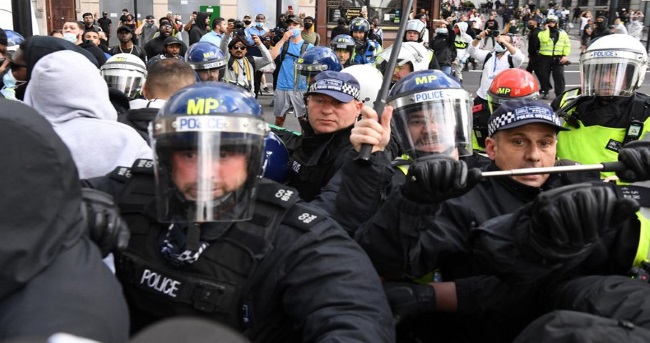 More than 100 people were arrested during far-right protests in London, which turned violent and left 19 others, including six police officers, injured, Scotland Yard said.

As of 9 p.m. on Saturday, at least 100 were arrested for offences including violent disorder, assaulting police officers, possession of an offensive weapon, possession of class A drugs, being drunk and disorderly and breach of the peace.

Saturday”s protests took place following a series of anti-racism demonstrations across Britain, sparked by the May 25 death of George Floyd, an unarmed African-American in the US city of Minneapolis.

He died after a white police officer knelt on his neck for nearly nine minutes while he was handcuffed facing down and repeatedly saying that he couldn”t breathe.

The arrests came after around 200 protesters breached the 5 p.m. curfew with most congregating around the statue of war-time leader Winston Churchill in Parliament Square.

The protests came despite London Mayor Sadiq Khan urging people to leave by the deadline, which was set by the Metropolitan Police under the Public Order Act.

By 7 p.m., police blocked off two pedestrian bridges between Embankment and Waterloo in London as Black Lives Matter protesters had been on them attempting to get north in the capital.

He said on Twitter: “Racist thuggery has no place on our streets. Anyone attacking the police will be met with full force of the law.

“These marches and protests have been subverted by violence and breach current guidelines. Racism has no part in the UK and we must work together to make that a reality.”

Home Secretary Priti Patel condemned the violence as “appalling and shameful” the “desecration” of a memorial to murdered Keith Palmer during the far-right protest in Westminster.

She said a “small minority” had behaved with “extreme thuggery”.

Also taking to Twitter, the Mayor wrote: “Millions of Londoners will have been disgusted by the shameful scenes of violence, desecration and racism displayed by the right-wing extremists who gathered in our city today.

“In the face of attacks and abuse, our police did a fantastic job to control the situation. Thank you.”