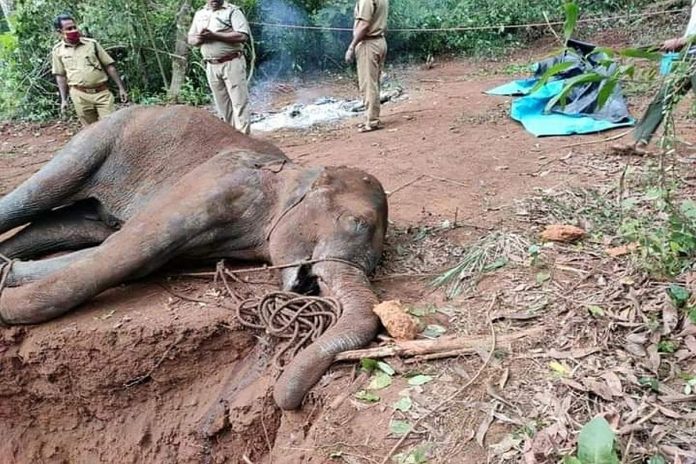 One person accused in the death of a pregnant elephant in Kerala’s Palakkad district has been arrested by police, the state forest department said on Friday,

“KFD has zeroed in on the culprits and recorded the first arrest in the wild elephant death case”, the department said in a tweet.

Three suspects have been under the scanner of teams probing the gory death of the pregnant wild elephant, Chief Minister Pinarayi Vijayan said on Thursday.

Personnel of Kerala police and the forest department’s Crime Investigation Team who are probing the incident visited the spot and collected evidence, he said, assuring that all concerns raised will not go in vain and justice will prevail and the culprits brought to book.

Forest department sources told PTI that the three suspects were being questioned and a search was on for two more people in connection with the death of the elephant on May 27.

State Governor Arif Mohammed Khan also took to twitter to express his anguish over the animal’s death and said “thousands of petitions from Kerala and outside” have been filed and the public outrage “evoked by this shocking event is certainly understandable”.

His remarks came amid the death of an elephant caused by eating a pineapple stuffed with fire crackers in Kerala’s Palakkad district. On May 25, she died in the river Velliyar where she took refuge while injured.

The video of the elephant went viral on social media, giving rise to a clamour to bring the culprits to justice.