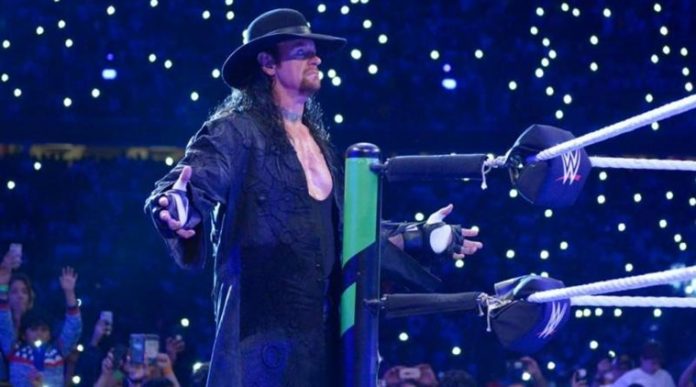 Smackdown begins with a brilliant tribute video for The Undertaker

Smackdown is live, and we see all the SmackDown superstars are on the stage clapping for the deadman.

We get a showing of the Boneyard match at WrestleMania.

WWE Legends throughout comment on Undertaker’s legacy such as Kane, Ric Flair, Edge and Triple H.

After the showing of the match, King Corbin is in the ring and he calls the Undertaker an old bag of bones and a shell of what he used to be. He then says The Undertaker spent a lot of his 30 years in WWE kissing ass, and references the Kiss My Ass club, of which Undertaker was the founding member. He then says Undertaker was holding down athletes like him for a long time.

Finally, he says he sucks before Jeff Hardy attacks him. Hardy is asked about his attack, and Hardy says Undertaker would be on Mount Rushmore four times. He also issues a challenge to Corbin, saying that he got his degree from Deadman University and will unleash all his knowledge on him.

After a kick, Cross rolls up Evans from behind for the win.

Review: 2/5. Average Match and a roll up to death finish. Nikki Cross is talented and I want to see her hold the Smackdown Women’s title.

Lucha House Party and The New Day vs. The Miz, John Morrison, Cesaro and Shinsuke Nakamura

Lucha House Party and The New Day win when Dorado drops an elbow on The Miz for the win.

Rating: 3/5. Felt like a house show match with happy ending.

Corbin is interviewed backstage and Corbin says he’ll give Hardy a lesson in reality. After tonight, Hardy will be able to rest in peace.

Strowman comes to the ring and he says when he first met Bray Wyatt, he felt fear, the kind of fear that makes the hair on the back of your neck stand up. That something is wrong. A fear that can make a grown man tremble. One night, when he looked at the swamp, he saw something slithering towards Bray’s lantern, and Bray stopped him when he tried to intervene. Bray said that was his friend. He was confused and when he walked towards that asnake, he knelt down and got face to face with it. When the snake lashed out and bit Bray in the face, Bray was laughing.

Bray didn’t flinch or bleed when it bit him. All he did was laugh. He knew at that moment that he was the devil himself, and he realized Bray himself was the serpent all this time. Braun started to do the devil’s work, and the bad part is that he loved every second. Parts of him still does. He’s done everything in his power to lock that part of him away and forget about it. But it calls and he can’t go on living like this. He proposes to Bray they go back to the swamp. Either Braun comes out the most evil SOB ever, or he’s spitting in the devil’s face and drag him to the swap where the alligators will finish him off. He’s ready to turn the place he calls home to the place of his destruction. Braun stares maniacally and laughs with Bray’s laughter in the background.

Hardy wins with the Swanton.

The show was technically a tribute to The Undertaker. He deserves all the praise. I’d miss him in the ring.

Three stars of the show.

It was a tribute show to The Undertaker. I would certainly miss the deadman. Other than that, Jeff Hardy was amazing as usual. He hasn’t lost a step. Corbin is annoying and I know that’s what heels are, but he needs a character change. Matt Riddle’s floating bro is one of the best finisher in Smackdown right now. Hope Matt is elevated to the top ASAP. He is money. Happy for Nikki Cross. She should win the Women’s Championship soon. I am all in for fresh faces in women’s wrestling. Braun is weird as a face. It is hard to digest a 7 ft. face in WWE. He needs someone to match his wrestling style soon. (Roman….)