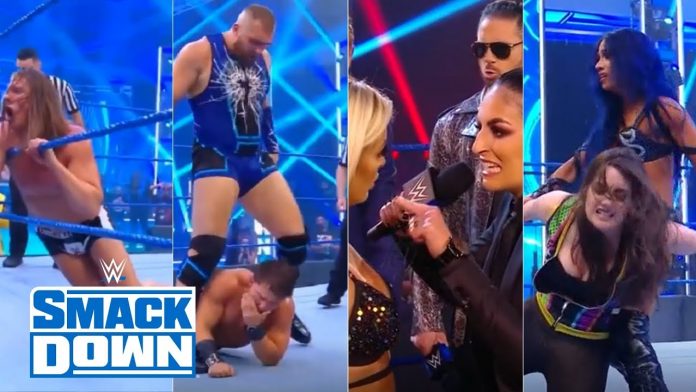 WWE Smackdown opens with AJ Styles in the ring.

Styles tells everyone ringside that that’s as close as they were going to get to the title. Styles is then asked what the title means to him and he says it’s vindication. It proves everything that he said was true, and that winners win and rise to the top. Titles are for those who grab it, and not those who want a handout. Renee gets ready to present the IC Title to her, but AJ says she’s not qualified and that only one person is. He then says only Daniel Bryan is qualified to present the championship to him.

AJ invites Daniel to the ring to present the title to him and put it around his waist. Daniel comes in the ring and AJ tells him to say congratulations. Styles also says he trusts Daniel to not do anything stupid and to have respect. Daniel takes the title and look at it, and then AJ suggests that maybe Daniel is bothered that what he said about the title was untrue. He said to prove that he’s a man, then do it, but he doesn’t have to unless he wants to be known as a coward. And don’t forget the congratulations.

Bryan puts the title around his waist and he passingly says congratulations. AJ says that was pathetic and to say it the right way. Daniel concedes defeat and that he was the better man last week. He respects his ability in this ring. Bryan also thinks that AJ is going to be a great Intercontinental Champion. He has the opportunity to be the greatest IC champion ever. He says he can prove it by defending it against the superstars around this ring. Imagine his legacy defending the title against Shorty G, Gran Metalik or Big E. AJ apologizes for asking Daniel to speak and that he has a different vision.

Only a select few will have a shot at this title, and it’s someone on his level, and Daniel’s at the bottom oft he list. Daniel says AJ should be willing to defend the title against Drew Gulak since he beat him two weeks ago. AJ says Drew will have to earn it or they’ll feel the consequences. That brings out the debuting Matt Riddle.

Matt introduces himself and AJ says that Matt is just another human being looking for another handout. Matt tells AJ he’s not asking for anything, but he wants to give AJ some advice. He heard that he’s the face that runs the place, but Matt is the bro that will run the show. AJ and Matt start brawling with each other and Matt sends AJ out of the ring with a kick.

Riddle was aggressive early with a German Suplex followed by two gutwrench suplexes for a two count. Styles with a back elbow, Styles walked away and Riddle hit a roundhouse kick to the head. Riddle hit a broton splash. Styles with shoulders, then chops and Riddle came back with strikes of his own. Styles hit a dropkick to take control along with a kick to the knee. Riddle with open hand palm strikes, kicks to the body and Styles with a thrust to the throat. Styles with a clothesline to send Riddle onto the apron. Riddle tried to pull Styles out of the ring, but then Styles kicked Riddle into King Corbin and that led to Riddle arguing with Corbin.

Back from the break Riddle catches Styles in the middle of a Phenomenal Forearm and hits the Bro Gerrick for the win in 13 mins.

Match Review: 4/5. One of the best under 15 minute Smackdown match in recent times. Matt Riddle proved once again where he belongs. Will he be pushed to the top? Maybe, maybe not considering the recent sexual allegations against him made on Twitter.

Jeff Hardy is backstage sitting and he’s staring into space. He’s cut off by a technician putting on a mic as he gets ready for an interview.

We get a recap of the Sheamus/Jeff Hardy feud.

Jeff says that he’s been holding up okay, but his physical state is getting a bit harder to adapt to as he is 42 years old. But he has a lot left in the tank. And Jeff says Sheamus doesn’t have a problem with him, but he has a problem with himself. He admits to being an alcoholic and an a junkie, an andrenaline junkie since he was 8 years old. Sheamus is nothing more than another obstacle on his road to redemption, and he’s not done yet.

Shorty G is asked about his height backstage, and he says it doesn’t matter how tall you are because he has abilities, and he also has eyes in the back of his head. He drops Mojo Rawley, who was mocking him from behind with a right hand, before heading out to the ring.

Shorty G wins with a roll-up.

Match Review: 1.5/5. Short match. Crowd would’ve been dead for it although they don’t have a real crowd here. Nothing against Mojo Rawley and Shorty G, they’re extremely talented wrestlers. The character needs to change and WWE writers’ must give these talented lads serious something to play with.

Miz and Morrison are out for Miz TV. Miz tells John they need to address Backlash and he addressed pulling Morrison off of Strowan. Morrison questioned why that happened and they said it’s because they changed the rules which made them lose focus. No other sports organization does that, and Miz also had to worry about Otis potentially cashing in. With that, they introduce Mandy Rose.

Mandy talks about her five year friendship with Sonya, and Miz and Morrison start mocking Mandy and she says she’s going to leave. Miz then says they have a surprise for Mandy, and it’s Sonya as she came out.

Deville comes out and berates Mandy for the bad 2020 she’s had and Mandy ultimately asks what Sonya has because Mandy has people that have been loyal to her from day one and Deville’s alone. Sonya said she’s not mad at Mandy, but she’s confused because she doesn’t see a difference between the two, yet she gets opportunities. Sonya then says she’s going to work to dismantle her piece by piece until the ugliness on the outside matches the ugliness on the inside. Thee two brawl until Mandy sends her out.

Sasha and Bayley are out on commentary.

The New Day win when they hit The Midnight Hour on Lince Dorado.

After the match, Shinsuke and Cesaro attack Big E and Kofi. Cesaro takes out Big E with a Neutralizer and Cesaro swings Kofi into a Kinsasha. Cesaro approaches the commentary table and are tired of being treated like kids. They beat them last week and they demand title shots and respect.

Alexa Bliss, Tamina, Naomi, Lacey Evans and Dana Brooke are backstage wondering who is going to challenge Bayley for the SmackDown Women’s Title. Eventually, Dana suggests they come together since Bayley disrespected all of them, and she suggests forming a united front to show they aren’t going to be disrespected any longer. Alexa asks where Nikki went.

Sheamus is interviewed backstage and is asked to respond to Jeff’s interview, and he realizes things have become personal and lines have been crossed. Sheamus then admits he’s a bully, and that people like Jeff deserve to be bullied, and he enjoyed kicking his head off at Backlash. He only regrets not kicking out his voice box. Sheamus also says Jeff doesn’t really believe that he’s resillient, and if Jeff can’t put himself down, Sheamus will and he’ll do it in the most Irish way possible, because next week, he plans on toasting Jeff Hardy.

Sasha wins with the Meteora for the win.

AJ Styles vs. Drew Gulak for the Intercontinental Title is announced for next week.

The rabbit mentions Bray has been upset about losing to Braun Strowman at Money In The Bank. Ramblin Rabbit asks if he remembers him, and Bray thanks the rabbit for reminding him. Before he can continue, Braun approahces the ring and says their chapter is over because he had his chance.

Bray warns Braun that he wasn’t lying about resurrecting the dead, because their story is just getting started. Bray reverts to his swap cult character and he says in order for them to move forward, they have to step back to where it all began. He created him, therefore it’s his duty to destroy him and he knows where he can be found. All he has to do is follow the buzzards. He takes the lamp and blows out the candle.

Top 3 Stars of the show.