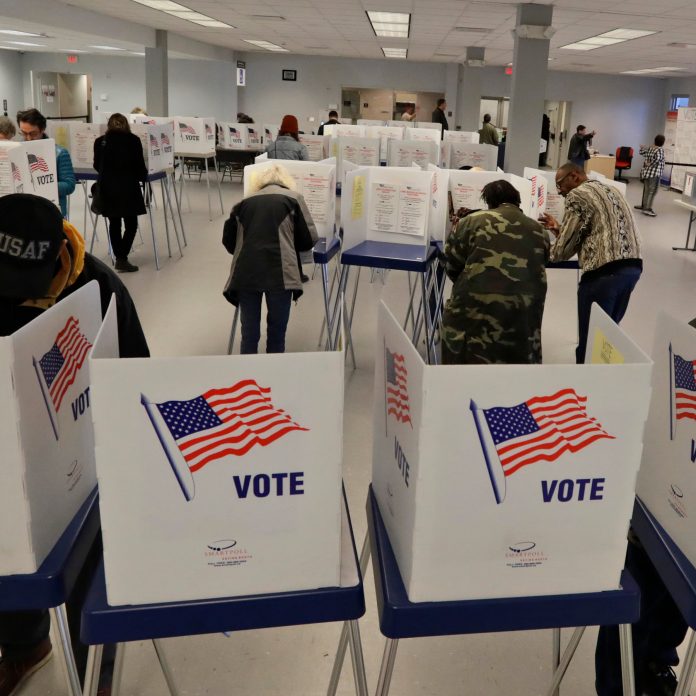 New York, one of the traditionally Democratic US states, on Tuesday will hold its primary polls in which most of the party”s candidates who win their respective races will be guaranteed a victory in the November presidential election over their Republican rivals.

The fight between the Democratic Party”s old and new guards, the relatively new vote-by-mail option and voter participation will be the keys to this week”s set of elections, reports Efe news.

Congresswoman Alexandria Ocasio-Cortez (widely known as AOC), state assembly member Catalina Cruz and state Senator Jessica Ramos are just three of the female politicians in the young progressive generation that burst onto the scene in the 2018 mid-term elections, unseating – as in Ocasio-Cortez”s case – former heavyweights within the Democratic Party”s apparatus on the national level.

But in addition, this year there are other aspirants to office such as Jamaal Bowman, who is facing off against veteran Eliot Engel with the support of Ocasio-Cortez and Massachusetts Sen. Elizabeth Warren, who have also launched themselves into the political arena to challenge the party”s traditional candidates.

What the state is seeing is a change of leadership in New York City”s legislative delegation, a change that began in 2016 when Dominican Adriano Espaillat defeated long-time Congressman Charles Rangel.

He was followed two years later by Ocasio-Cortez”s win over Joe Crowley, who at that time was one of the most powerful Democrats in Congress, City University of New York political scientist John Gutierrez told Efe news, adding that he believes that this trend will continue this year.

The weakness of the Republican Party in New York state, the scanty number of registered conservative voters and the overwhelming majority of Democrats on the voting roles – with their dominance in the state”s two legislative chambers – make the winner of the Democratic primaries the favorite to take the general and local election, especially in New York City, with the exception of certain parts of Brooklyn, Queens and Long Island.

Ocasio-Cortez, Cruz and Ramos, along with other candidates like Julia Salazar and Alexandria Biaggi, are running in the primaries to try and shore up their support and clout on the political scene given that during their brief time in office so far – just two years since they came into office with the last elections – their names may not yet be very well-known among their constituents.

Lawmaker Catalina Cruz, who is running for re-election for the first time in Queens, is aware of the risks facing new candidates, but she said that”s not her situation, telling Efe news that she”s worked “very hard” and hasn”t been “sitting around waiting” for people to get to know her.

Ocasio-Cortez has become one of the symbols of the new Democratic and progressive generation who is seeking to carve out a niche within the party ranks and change its agenda on the national level, strengthening its insistence on dealing with issues such as universal health care and education for all and brandishing the Green New Deal as one of their key objectives, the ecological reorientation of the US economy to put an end to environmentally harmful greenhouse gas emissions.

Her political stances in Washington, where she has allied herself with other progressives such as Ilhan Omar of Minnesota, Ayanna Pressley of Massachusetts and Rashida Tlaib of Michigan – the four of them known as “The Squad” – have sometimes brought criticism from within her own party, along with the ongoing broadsides from Republican lawmakers and pundits, who call them radicals and communists.

Ocasio-Cortez – who is of Puerto Rican heritage – will face off on Tuesday against three challengers from her own party, among whom the best-known face is former television host Michelle Caruso-Cabrera, who has blamed the lawmaker for radicalizing and polarizing the political arena and not defending the interests of her constituents, who live in residential neighborhoods in The Bronx and Queens.

Another of the keys to these primary races will be voting by mail, which is being implemented for the first time in New York state, as well as voter participation, the level of which will conceivably be affected by the pandemic and by the new voting system that also includes early voting at some polling places set up to allow for it.

Voting by mail has been seriously called into question by Republican lawmakers and by President Donald Trump, who have stated – albeit without evidence – that it opens the door to election fraud.