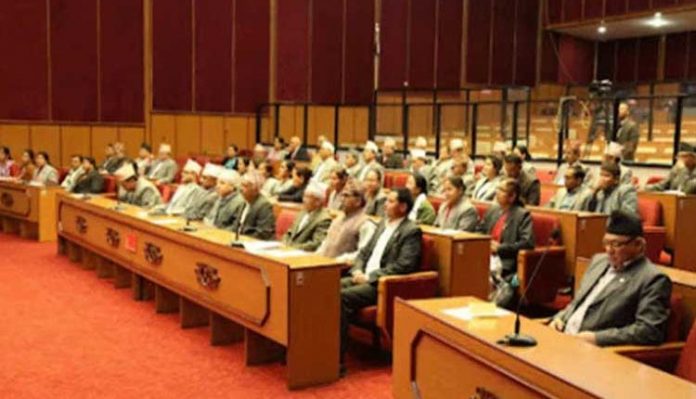 Amid objections from three major parties, a Nepal Parliamentary panel has endorsed an amendment bill on the Citizenship Act 2063, with the provision that foreign women married to Nepali men will have to wait for seven years to acquire naturalised citizenship.

The State Affairs and Good Governance Committee had been debating the bill for the last two years, The Kathmandu Post said in a report on Monday.

The committee went ahead with the seven-year provision after the ruling Nepal Communist Party (NCP) took a decision to that effect on Saturday.

“The citizenship amendment bill has been endorsed by majority votes,” Shashi Shrestha, chair of the committee, said on Sunday following the endorsement.

“A foreign woman married to a Nepali man will be granted naturalised citizenship after her continuous stay in Nepal for seven years.”

In the 27-member committee, the ruling party holds a majority with 16 members.

The Nepali Congress has six members and the Rastriya Janata Party and the Samajbadi Party have two members each.

Nepal Majdoor Kisan Party, which has one member, called for an even stricter provision of 15 years.

Of the 27 members, eight, including committee chair Shrestha, are women.

The Nepali Congress, Samajbadi Party Nepal and Rastriya Janata Party Nepal had opposed the provision, calling it unconstitutional and saying that it goes against the provision of the interim constitution 2006, as per which the Citizenship Act 2063 allowed foreign women to acquire naturalised citizenship after getting married to Nepali men, reports The Kathmandu Post.

According to Clause 5.1 of the Citizenship Act, foreign women are immediately eligible for citizenship upon marriage to a Nepali man while there are no provisions for a foreign man who marries a Nepali woman, requiring foreign men to spend a minimum of 15 years in Nepal before being eligible to apply for naturalised citizenship.

The House committee on Sunday did not discuss the issue of foreign men marrying Nepali women.

Spokesperson for the Parliament Secretariat Rojnath Pandey said the bill was ready to be tabled in the House.

“The bill may be tabled in the next meeting of the HoR scheduled for Tuesday. If the speaker wants, it could be put to vote soon,” The Himalayan Times quoted Pandey as saying.