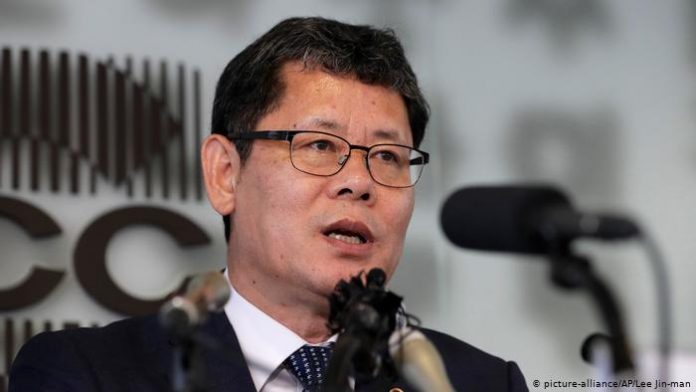 South Korean President Moon Jae-in on Fridayaccepted the resignation of Unification Minister Kim Yeon-chul, who had offered to step down to take responsibility for worsening inter-Korean relations.

According to government spokesman Kang Min-seok, Moon had dinner with Kim on Thursday and “listened to his position” in connection with his decision to quit, reports Yonhap News Agency.

But Kang did not reveal the presidential office”s plan related to Kim”s successor.

Vice Unification Minister Suh Ho is expected to serve as Acting minister for the time being, with Kim scheduled to leave office later Friday.

On the media-driven shortlist of possible candidates to replace Kim are Lee In-young, a four-term lawmaker who once served as the ruling Democratic Party”s floor leader, and Im Jong-seok, former chief of staff to Moon.

Speculation is also rampant that Moon may be pushing for a broader shake-up of his diplomatic and national security team, especially amid a call to replace Chung Eui-yong, director of national security at the presidential palace, and National Intelligence Service Director Suh Hoon.

Cross-border tensions are running high after North Korea blew up an inter-Korean liaison office in its border town of Kaesong and threatened to redeploy troops to border areas over the sending of propaganda leaflets by defectors into the North.

Pyongyang also confirmed it has rejected Moon”s proposal to send Chung and Suh there as his special envoys in a bid to diffuse tensions.