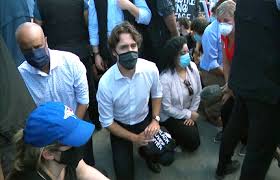 Canadian Prime Minister Justin Trudeau and his ministers have taken a knee in solidarity with the demonstrators who were marching against racism and police brutality in Ottawa.

Thousands of people on Friday took to the street in downtown Ottawa to protest against racism, chanting “Black Lives Matter,” “Enough is Enough,” “I can”t breathe,” and “No Justice, No Peace.”

On Parliament Hill in the Canadian capital city, Trudeau and his ministers joined the march and took a knee in solidarity with the demonstrators, Xinhua reported.

“We will be walking to inspire policing change. We all see what is happening in the USA right now and the entire world is being shaken. Ottawa also has its share,” said Yvette Ashiri of the African Canadians Association of Ottawa.

Several hundred people marched from Parliament Hill to the Senate of Canada Building, and then down Sussex Drive towards the US Embassy.

The Ottawa demonstration came just over 10 days after the death of George Floyd during an arrest in the US city of Minneapolis. Floyd died after a white police officer knelt on his neck for nearly nine minutes while he was handcuffed face down on a Minneapolis street on May 25.

Meanwhile, thousands of people reportedly also took to the street in downtown Toronto to protest against racism.

The slogan is in reference to Floyd”s repeated plea to the police officer before he died.

Toronto Police Chief Mark Saunders was present at Friday”s protest. He was taking a knee with several other officers on a street in a show of solidarity with the demonstrators.

Rallies of similar themes also took place in other Canadian cities including Vancouver, according to the local media reports.