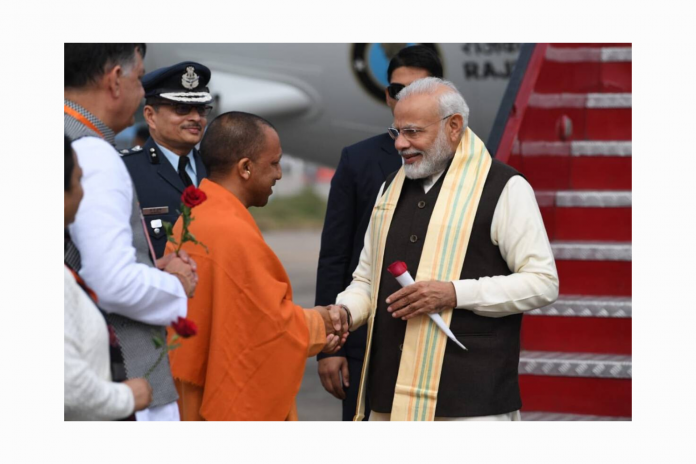 The Prime Minister, who launched the scheme through video conferencing, lauded the role played by Uttar Pradesh in combating the Covid-19 pandemic and making the state ”Aatmanirbhar” (self-reliant).

He appreciated the efforts of Uttar Pradesh Chief Minister Yogi Adityanath for showing high level of preparedness during the pandemic.

“UP has a population of 24 crore and could have multiplied the Corona crisis, but Yogi Adityanath, with his untiring efforts, managed to restrict the spread of the virus. The population of UP is equal to the combined population of four European countries, the UK, France, Italy and Spain. These four countries have reported 1.3 lakh deaths, while UP, with a similar population, has recorded only 600 deaths, which speaks volumes for the efforts of the state government,” the Prime Minister said.

He said that UP has shown the power of labour by combining various welfare schemes and ensuring employment for the people, particularly the migrant works.

“This is what I mean by a double-engine government. Yogi Adityanath has given a massive push, in qualitative and quantitative terms, to the schemes of the Centre and the state by clubbing them and relating them to employment and development,” he said.

Talking about the Covid-19 crisis, the Prime Minister said that the entire global population had been affected by it.

“We do not know when we will get rid of this virus. The only medicine is to maintain ”do gaz ki doori” (physical distancing) and wearing a mask till a vaccine is prepared to kill the virus,” he said.

The Prime Minister, through video conferencing, spoke to Vinita Pal of Gonda, Tilak Ram of Bahraich, Qurban Ali of Siddhartha Nagar, Narendra Kumar of Gorakhpur, Ram Chandra of Sant Kabir Nagar and Deepu of Jalaun, and asked them how they had re-established their business amind the Corona crisis.

He appreciated their efforts to turn the crisis into an opportunity by availing the benefits of the various government schemes.

The Prime Minister asked Tilakaram that “you have got a house, but what will you give me?” In response, he said, “We pray that you remain the Prime Minister all your life.” Modi then told him, “You will do one thing for me. You will educate your children properly and keep me informed about it.”

Earlier, Yogi Adityanath welcomed the Prime Minister and thanked him for his guidance and support during the Corona crisis. He listed the works done by his government during the crisis, especially with regard to migrant workers.

The ”Aatmanirbhar UP Rojgar Abhiyan” is focused on providing jobs, promoting local entrepreneurship and creating partnerships with industrial associations and other organisations to create employment opportunities.

It is in addition to the Centre”s schemes being run under the ”Aatmanirbhar Bharat” mission to stimulate various sectors.

The Prime Minister also held talks with beneficiaries of the campaign which provides employment to more than one crore people, saying that UP had launched a major plan for its implementation.

Modi said, “The work done by the Yogi Adityanath government in Uttar Pradesh was instrumental in preventing the spread of the pandemic in the most populous state.”

“Under the leadership of Yogi Adityanath, the state government had left behind developed countries such as France, Italy and Spain in the precautionary measures and solutions to save its citizens from the pandemic. The government had not missed the chance to turn disaster into opportunity and fought effectively against the global crisis.”

Modi said, “While other states are struggling in the fight against corona, UP has launched major development plans. Once again, many congratulations to you for starting these employment opportunities.”

The other states of the country, he added, could also learn a lot from this approach.

“UP people must be saved from the coronavirus. No drug or vaccine has come till date. The only medicine against this pandemic is maintaining a gap of two yards from one another and covering mouth, using face cover or a scarf. Until the corona vaccine is devised, we would be able to prevent it with this medicine,” he added.

The state’s doctors, paramedical staff, sweepers, policemen, anganwadi workers, bank and post-office staff, transport department, migrant workers, etc had contributed to fight this menace with full devotion. Uttar Pradesh”s efforts and achievements are huge as it is a bigger state than many countries combined in the world, he said.

Modi said, “The hard work by the UP government, in a way has helped save the lives of at least 85,000 people (as the death toll could have reached that figure without precautions). Today if we are able to save the lives of our citizens, it is a matter of great satisfaction.”