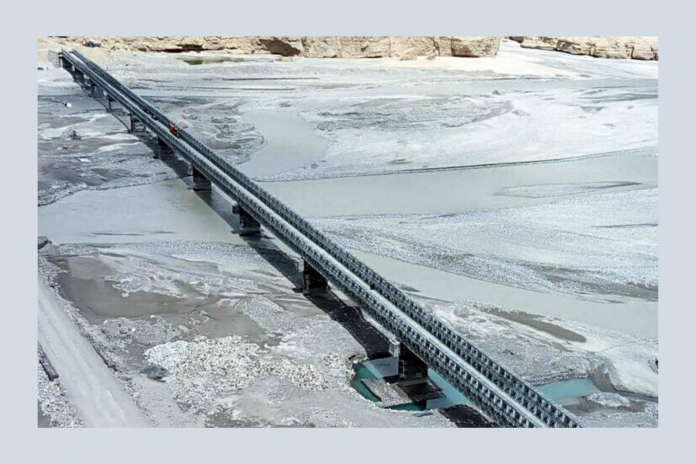 The construction of a strategically important bridge over the Shyok river in eastern Ladakh was completed on Thursday amid the face-off with China at the Line of Actual Control (LAC) in Galwan Valley.

The 60-metre bridge is around four kilometres east of the confluence of the Shyok and Galwan rivers, and links the narrow mountainous region to the Shyok-Daulat Beg Oldi road. The bridge is on the Shyok river very close to the Shyok-Galwan meeting point aligned North and South and will improve the movement of Indian troops in the region.

The Indian Army clarified that it is not on the track moving to Patrolling Point 14 at Galwan Valley where the clash took place.

The barbaric assault on June 15 on Indian soldiers at Patrolling Point 14 has left little scope to ease tensions between the two countries in the near future.

The tense situation at Galwan will be a prolonged one in all likelihood as India has lost 20 of its soldiers.

There is renewed anger in the Indian security establishment after it came to light that 10 Indian Army men, including two officers of the rank of Lieutenant Colonel and Major, were in Chinese Army captivity for three days and were only released on Thursday evening.

At these four points troop concentration has increased manifold as China changed the status quo.

The Chinese move underlining its expansionist design kicked-off after India began building road infrastructure in its territory near the LAC for easy movement of its troops.

The Galwan Valley attack on June 15 on Indian soldiers was not an isolated one.

The unprovoked Chinese actions started on May 5 and continued leading to the attack in Galwan Valley in which 20 Indian soldiers were martyred and 76 were injured.

These are the first casualties faced by the Indian Army in a clash with the Chinese People”s Liberation Army since 1975 when an Indian patrol was ambushed by Chinese troops in Arunachal Pradesh.

The Indian troops were outnumbered 1:5 when the Chinese PLA troops attacked them, sources said on Wednesday.

“The number of Indian Army troops compared to PLA troops were in the 1:5 ratio,” said sources, adding that China used thermal imaging drones to trace the Indian soldiers before brutally attacking them.

“It was the deadliest attack carried upon Indian Army personnel,” government sources said.