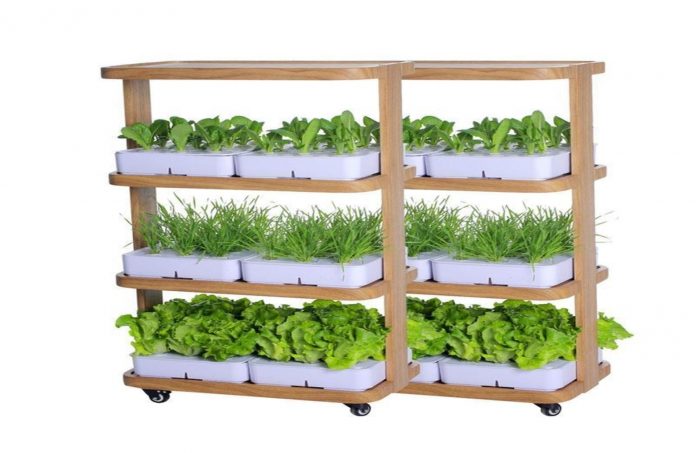 What is Hydroponic Farming?

The raw meaning of hydroponics is ‘working water’ – the word can be broken into two parts, Hydro (Water) and Ponos (labor or work), hence working water.

Hydroponics is the method of growing plants in a soilless medium which enables them to use the required nutrients essential for their growth. Hydroponics can be considered as a home-made project, through this method, you can bring farms into your houses. This method helps us to bridge the gap between urban and rural, if practiced in urban areas it can help feed a family of four and add to your earnings similarly help the rural populations, most importantly farmers can benefit from this method. You don’t require a separate space or land for farming, there are various types of hydroponic systems available online or you can make one at your home with the help of Youtube by causing the least possible strain on your pocket. Most common plants that can be grown hydroponically are:

Everybody is racing, for some or the other thing, everyone thinks if they stop for a second it is going to cost a lot, this fear led humans to detach themselves from Nature, Hydroponics can be considered a stress-relieving hobby, you can plug in your earphones and relax in your green space, taking you a little closer to Nature.

As famous Indian stand-up comedian Zakir Khan says, ‘Baadal important hai’ (meaning, clouds are important), likewise Water is important too, hence this method saves on water, plants grown using this method use only 10% of water compared to field-grown ones. Plants take up the necessary water, while runoff water will be captured and returned to the system, although an efficient hydroponic system will be free of losses, evaporation and water leaks are few common losses.

In a hydroponic system, there is an effective use of nutrients and it’s the farmer that can control the nutrient intake.

Hydroponics is considered as the farming of generation next, it’s been practiced in space by the astronauts, this method does not involve the use of soil, instead of the conventional soil a by-product of the coconut industry “coco-tek” or “cocopeat” also called coconut coir is one of the widely used media for hydroponics, It is organic made, it can hold water and the air quite well, this replacement is renewable and environmentally friendly.

Hydroponics are farmer-friendly, it lets the farmer produce foods at the appropriate time to maximize their business profits or help them as a small contribution in paying off debts.

The main attraction of Hydroponics is that you can grow crops where the land is limited or contaminated. A hydroponic system makes the best use of the space and location as everything that a plant needs to grow and sustain is provided in the system itself. So plants can be grown in your apartments or any place that you like without compromising on a huge chunk of your home.

Why Hydroponics is effective?

Usually, the roots of the plant expansion and spread out to find the required oxygen and nutrient in the soil. In a hydroponic system, roots are sunk in a tank full of oxygenated nutrient solution, which helps them maintain direct contact with vital minerals which further help plants grow close and save huge spaces.

Nothing can happen overnight, when you compare India’s population with others it’s just not fair to suggest something that is working for one country would work for ours too. We can either crib about it or consider population not as a limitation but as a possibility. So here is a small task for you, if you have reached here I believe you know enough about hydroponics to impart the same knowledge to at least one other person, if you start practicing hydroponics then that is the best if you think this subject is dry and you would rather Netflix and Prime, then chill just pass on the information to the other one, ask the other one to do the same. I am a believer of the bit, so do your bit so this would help form a ‘knowledge chain’, Chanakya in the 4th century said ‘knowledge is power so let it reach to the people who have all the resources, interest and just lack the knowledge. Hydroponics can be a potential solution for the current farmer and environmental based atrocities, let a farmer know about it, tell him or her that he has a way of growing a crop year around without spending huge bucks and harming the environment. This might not solve his or her loan problems but would reduce the burden and add to the earnings and would not let the farmer sleep an empty stomach hence save a life because #alllivesmatter it’s time we abide by the hashtag. So it’s up to you to post an Instagram story or Facebook post about people sleeping an empty stomach or you can be a hero who provides a solution which feeds the empty stomach as well as help the environment, stop wishing for change rather be the change, So let’s Save the Planet and Save the Farmers!

Remember people, United we stand, We might never fall!