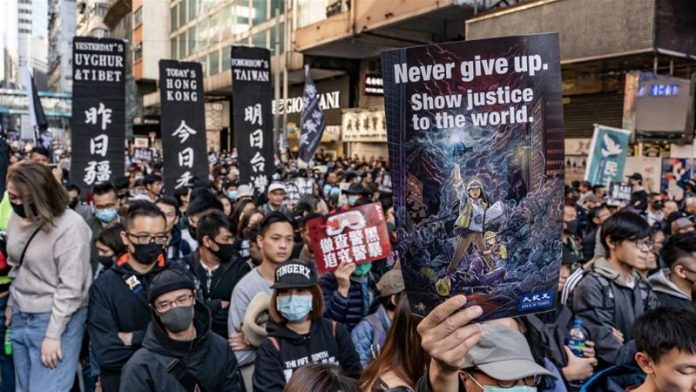 Police in Hong Kong announced on Saturday that the annual pro-democracy rally which takes place every year on July 1 has been banned for the first time in 17 years.

The protest rally has been taking place every year since the handover of Hong Kong in 1997.

Hong Kong had been under British colonial rule until then when the control of the territory was handed back to the Chinese.

China announced a draft national security law in May that would be imposed across its territory, including Hong Kong, to tackle “terrorism”, “separatism” “subversion of state power” and foreign interference.

The sweeping bill, which would bypass Hong Kong”s legislature, would mean that mainland China would implant its national security apparatus to operate in the semi-autonomous region for the first time.

In a letter sent to the pro-democracy group Civil Human Rights Front (CHRF), authorities allege violent episodes have occurred in recent protests of this nature and that the march would put “pose a severe threat to public health” given the safety regulations in place to curb the coronavirus pandemic.

“Due to persisting social unrest, Hong Kong police have cautiously assessed the risks and believe that some participants of this public assembly and public procession may depart from the planned rally location and marching route and violently vandalise buildings as listed above,” the letter published by the CHRF on Facebook says.

Despite the fact demonstrations called by CHRF have been mostly peaceful, Hong Kong police said activists “may pose a severe threat to the safety of other participants, citizens, journalists and police officers and you do not have the capacity to control their acts”.

Authorities said the rally would exceed the rule in place to stem the spread of Covid-19 whereby gatherings have been limited to 50 people.

Since the pandemic struck police have repeatedly rejected applications to hold public assemblies including the 30 year-old commemoration to honour victims of the 1989 Tiananmen massacre.

Since 1989, a candlelit vigil has taken place on June 4 and despite this year”s ban thousands defied the order and gathered nonetheless.

Hong Kong Chief Executive Carrie Lam has denied that there are any political motivations behind these prohibitions, but many critics are cynical given Hong Kong”s Disneyland, public pools and bars have been authorized to operate freely.

Hong Kong has been rocked by pro-democracy protests which have had a knock-on effect on the financial hub with local GDP falling by 2.8 per cent and 3 per cent in the last two quarters of 2019, and 8.9 per cent in the first quarter of 2020.

The civil unrest combined with the dramatic impact of the pandemic on the global economy has further worsened the semi-autonomous region”s economic forecasts.

The political landscape in the former British colony has also deteriorated particularly since the announcement of Beijing”s national security bill.

The 1984 Sino-British Joint Declaration, which articulated Hong Kong”s handover from British to Chinese hands in 1997, established a legally binding treaty whereby Hong Kong”s freedoms and autonomy had to be safeguarded for at least 50 years from that date.

The Chinese Ministry of Foreign Affairs has said on numerous occasions that the clauses of the treaty were fulfilled at the time.

Macau follows Hong Kong with suspension of its Taiwan office