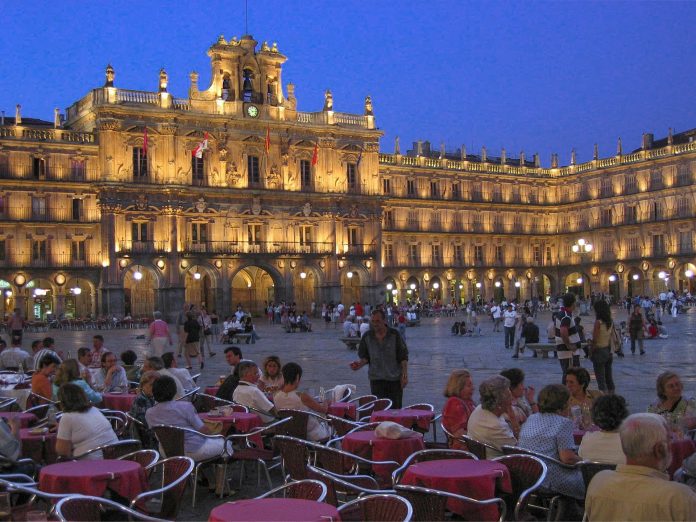 Salamanca is a city in western Spain that is the capital of the Province of Salamanca in the community of Castile and León. The city lies on various hills by the Tormes River. Its Old City was named a UNESCO World Heritage Site in 1988. As of 2018, the municipality has a population of 143,978.

It is one of the most famous university cities in Spain and supplies 16% of Spain’s market for the teaching of the Spanish language. Salamanca attracts thousands of international students.

It is situated about 200 kilometers (120 miles) west of the Spanish capital Madrid and 80 km (50 mi) east of the Portuguese border. The University of Salamanca, which was established in 1218, is one of the oldest universities in Spain and the third oldest western university, but the first to be given its status by Pope Alexander IV who gave universal legality to its degrees. With its 30,000 students, the university is, together with tourism, a main source of income in Salamanca. It is on the Via de la Plata path of the Camino de Santiago.

Through the mists of time, Salamanca has principally featured in a leading role concerning the most notable events that have taken place in the Kingdom of Spain. It is in Salamanca where you will find traces of the Pre-Roman civilization resident to this area essentially alongside the Tormes River in the town of Teso de San Vicente. Here, an Iberian sculpture of a bull regionally known as the ‘Verraco’ stands in the middle of a Roman viaduct.

The city was established in the pre-Ancient Rome period by the Vaccaei, a Celtic tribe, or the Vettones, a Celtic or pre-Celtic Indo-European tribe, as one of a pair of forts to protect their territory near the Duero river. In 220 BC Hannibal laid siege to the city and captured it. With the fall of the Carthaginians to the Romans, the city of Helmantica, as it was known, began to take more interest as a commercial hub in the Roman Hispania due to its favorable location. Salamanca lay on a Roman road, known as the Vía de la Plata, which connected it with Emerita Augusta (modern-day Mérida) to the south and Asturica Augusta (present-day Astorga) to the north. Its Roman bridge dates from the 1st century and was a part of this road.

Numerous triumphs, all claiming control over Salamanca, have taken place in the past. For the most part, it was the Arabs who conquered the city on many occasions. However, the Christians did not want to lose the city and therefore they returned in vindictive conquest missions that worked to their success as they managed to recapture the city. To sum up all these conquest missions, the Europeans conquered the entire expanse of Salamanca under King Alfonso VI.

The Battle of the Royalties

For the duration of the 15th century, not only Salamanca but the entire Kingdom of Spain had to come to terms with a horrible battle among the opposing sides of the Infantes of Aragón and D. Alvaro de Luna. The battle was made worse by the regal families of Enrique and Manzano. This was later the murder of two sons of the royalty of the Enrique dynasty by a duo of brothers from the Manzano Empire. The mother of the deceased got into a hot race of the slayers, located them at an inn where they were having a good time. The fun did not last as she killed and took away their heads to the graveyard of the Santo Tomé convent. This was the very location where her sons had been lied to rest earlier on.

This saw the city become divided into two adversarial factions, each allied to their respective royal family. The outcome was a bloodied city in due course of time where many lost their lives and livelihoods in what remains to be one of the most terrible massacres in the kingdom of Spain.

The Peninsular War that took place between 1808 and 1811 was adverse for the inhabitants of Salamanca. German forces under the leadership of Napoleon disrupted the way of life for the citizens of Salamanca and slaughtered several educational institutes, monumental buildings, and castles for the duration of the battle of Arapiles.