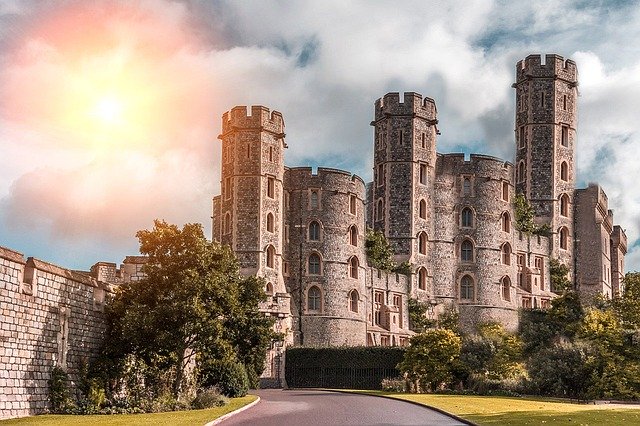 Castles evoke a history full of exploitation and romance. Castles remind us of a time in history in which there was no government. Although there was not mass chaos and anarchy, there was less order. Castles were the foundation of feudalism. Castles can be seen as a demonstration of a feudal society. Feudalism began with the rise of castles and ended with their end. The castle set the trend as the only homestead that nobility would live in during this time. Castles were inspired by many medieval cathedrals in Europe. Although castles helped many purposes, their primary purpose was the military. At that time, people were not defended by merely shutting and locking a regular wooden door. They needed the security of castles and their knights. The lords and constables of castles needed serfs to work the land to make revenue to pay rent to the more important nobles. Given the following testimony, it is relatively apparent why castles and castle building played an effective role in the development of Western Europe.

Castles are unique to medieval times. The word medieval in our times is an insult to anything as is the word feudal.

Castles blended the combination of residence and fortress. The first castle dates back to King Sargon II of Khorsabad in Ancient Egypt. He built a majestic palace for himself to shield him and his subjects. The first recorded sources to castles were the Edict of Pistes by Charles the Bald, king of the West Franks. “We will and expressly command that whoever at this time has made castles and fortifications and enclosures without our out permission shall have them demolished by the First of August” Other castle laws were the Norman Institutions handed down by William the Conqueror after he took over England. One law says that no one shall raise castles in Normandy without the Duke’s permission.

An excellent castle site was one that had natural obstacles for the defense such as steep hillsides and water. Castles that were carved on rocks or islands were especially effective. An example of this is Bodiam in Sussex which was the home of Sir Edward Dalyngrigge in 1385. A moat offered good protection, but building on a lake or river allowed better protection. The site should not be too remote. It should have water and building material easily available nearby. A site should have a good climate, good pasture, and ample fertile land. If a castle had all these things, it would improve its chances of withstanding a siege.

A large bulk of early castles followed the motte and bailey design. These designs utilized earth and timber. A motte and bailey design is a design where the keep is on a hill or motte behind the bailey which is the open area of the castle similar to a town square. A bridge normally connected the motte to the bailey. The motte was a large mound of earth or rock. Sometimes it was artificial, but the majority of the time it was real. At its base, there was a broad trench that resembled a moat. This was used as a defense. Surrounding the motte was a wall of timber. The motte also included the keep which is where the lord of the manor and his family lived. The keep was the deepest part of the castle. It was the last defense against attack. The keep has also been committed to as the donjon. This is where the French got the word dungeon meaning the jail or place to hold prisoners.

Circling the entire premises was a wooden fence that was at least ten feet in height. These wooden stakes were then embedded in the ground for support. The fence sometimes stood upon posts to allow men to get through. During a siege, the border would be covered with wet animal skins to curb the threat of arson. Most motte and bailey castles were built before William the Conqueror’s conquest in 1066.

Walter the Archdeacon wrote a biography of John, bishop of Therouanne about 1130. In the book he explains Merchem Castle near Dixmude: “There was, near the porch of the church, a fortress which we may call a castle… exceedingly high, built after the custom of that land by the lord of the town many years before. For it is the habit of the magnates and nobles of those parts… to raise a mound of earth as high as they can and surround it with a ditch as broad as possible. The top of this mound they fully enclose with a palisade of hewn logs bound close together like a wall, with towers set in its circuit so far as the site permits. In the middle of the space within the palisade, they build a residence, or, dominating everything, keep.”

Castle planners saw a need for reform because wood and earth were not strong and were not sufficient protection against fire. There was also a need for bigger, grander castles because noble visitors did not travel alone so a castle would have to have enough room for the occasional visitor and his or her group. The architects who outlined castles were known as master masons. They saw that stone would be a more effective building material. Although it was cold and hard to work with, it provided much-needed protection against fire. These newer castles are called enclosure castles. Like motte and bailey designs, enclosures castles had a wall guarding the edge of the manor.

However, these castles were not built upon hills or mottes. The keep of the castle was consolidated into the wall surrounding the property. These castles still had a bailey. With this new style of castles came a new construction material. Stone became the only material to build one’s castle out of because it made castles much stronger against attack. The tower of London is an example of a masonry castle. The perfect stone for castles was the fine limestone of Caen in Normandy. This limestone was thin when first quarried but gradually became hard as it was exposed to air. To shield against the cold stone walls of castles, the women made tapestries for the walls. The tapestries almost always included a story relating to the castle. One of the most popular tapestries is the Bayeux Tapestry. It depicts the Norman knights before Hastings in 1066. Since they were now using stone, castle builders were able to blend defenses into the castles.

Castles were the foundation of feudalism. They commanded the land and everything within it. A castle was a lord’s answer to a mounted cavalry charge. Castles were powerful centers of military power and territorial lordship whether or not the king or prince was there. Castles are an essential part of history. They are remarkable structures that still influence modern houses today.