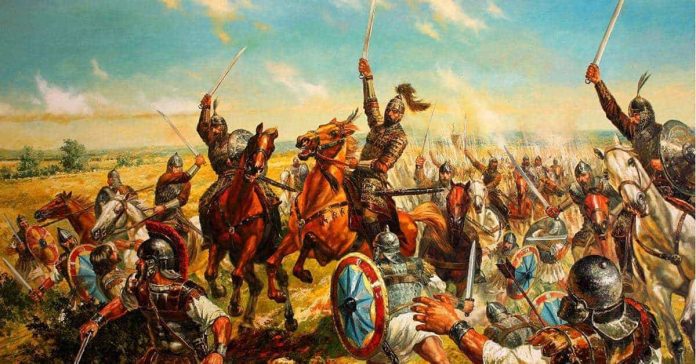 This is part 6 of the historic battles series. Part 5 was an exhausting Battle of Salsu – 612 AD.

The Battle of Byzantium was a war of the heirs of Alexander the Great (see Diadochi) between the general Antigonus Monopthalmus and Cleitus the White. It was a two-day clash near Byzantium at the Hellespont in 317 BC.

After the demise of Alexander in 323 BC, his officers began fighting over his huge empire. Soon the debate and disagreements deteriorated into open warfare, with each officer trying to allege a portion of Alexander’s large Empire. One of the most capable successor generals (Diadochi) was Antigonus Monophthalmus, because of an eye he lost in a siege. After the First War of the Diadochi in 321 BC, the second distribution of the Empire took place, the Partition of Triparadisus; Antipater became the new regent of the empire and Antigonus Strategos of Asia (charged him with hunting down and defeating the remnants of the Perdiccan faction). Antigonus took command of the Royal Army and after being bolstered with more reliable troops from Antipater’s European army he marched against their enemies in Asia Minor. In 319 BC he first marched into Cappadocia against Eumenes whom he crushed at the battle of Orkynia. Eumenes escaped to the fortress of Nora where Antigonus invested him. Leaving the siege of Nora to a subordinate Antigonus marched against the residual Perdiccans and destroyed them at the battle of Cretopolis.

Antigonus’s coalition partner, Antipater, died of old age that year and left the authority to Polyperchon. Antigonus did not accept Polyperchon authority and formed a coalition with Cassander, Ptolemy, and Lysimachus against the coalition of the new regent. In 318 BC, Antigonus drove Cleitus the White, the satrap of Lydia, out of his satrapy. Cleitus retreated to Polyperchon who equipped him with a large fleet and sent him to take command of the Hellespont at the start of the summer of 317 BC.

The two armies met in battle around Byzantium, Cleitus won a victory in which some 70 ships of Nicanor were taken, sunk or crippled, the remnant managing to escape to Chalcedon, where they were joined by Antigonus and his army. Antigonus directed the remaining 60 ships to be readied for renewed action and selected his strongest and most loyal soldiers as marines to these ships. Meanwhile, the Byzantines transported his archers, slingers, and peltast to the European shore, where Cleitus’s victorious forces were settled. At dawn the next day Antigonos launched an assault by land and sea and caught Cleitus entirely by surprise; Cleitus’s force was arrested or eliminated.

Cleitus succeeded in escaping with a single ship, but he was soon forced to run it aground and decided to reach Macedon by land. He was ambushed and beheaded by some soldiers working for Lysimachus. This excellent stroke greatly enhanced Antigonus’s reputation for military genius and freed him from the further worry of Polyperchon meddling in Asia. He at once set out to deal with Eumenes who was creating problem in Cilicia and Syria.