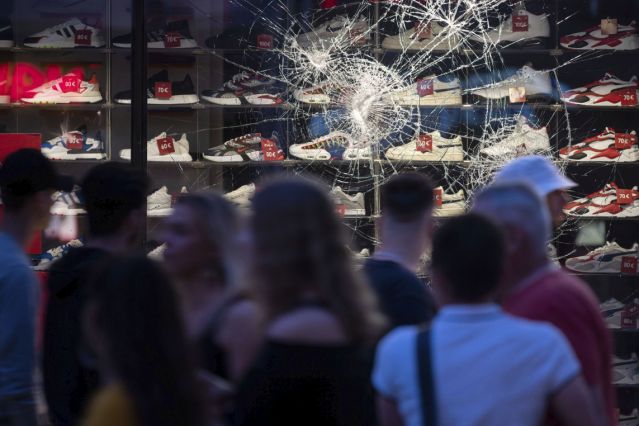 Angela Merkel’s spokesman has condemned weekend disturbances in the southwestern city of Stuttgart, where a check for drugs was followed by violence against police officers and vehicles, then widespread vandalism of storefronts.

The scenes “are abhorrent and must be strongly condemned,” Merkel spokesman Steffen Seibert said Monday. “Anyone who takes part in such outbreaks of violence, brutally attacks police officers and destroys and plunders shops cannot in any way justify it.”

Seibert thanked police officers, saying they “should know that the German government and millions of people stand behind you.”

The disturbances started after officers stopped a 17-year-old on suspicion of drug possession as several hundred people partied outside around 11:30 p.m. Saturday, police said. Bystanders started throwing stones and bottles, and smaller groups ran through surrounding streets breaking shop windows, according to police.

Police said 40 businesses were vandalized, nine of them were looted and 12 police vehicles were damaged before officers brought the situation under control.

Police have said the violence had no apparent political motivation. They said the suspect initially stopped was a white German citizen. Of the two dozen people arrested, half held German passports and half were citizens of other countries.