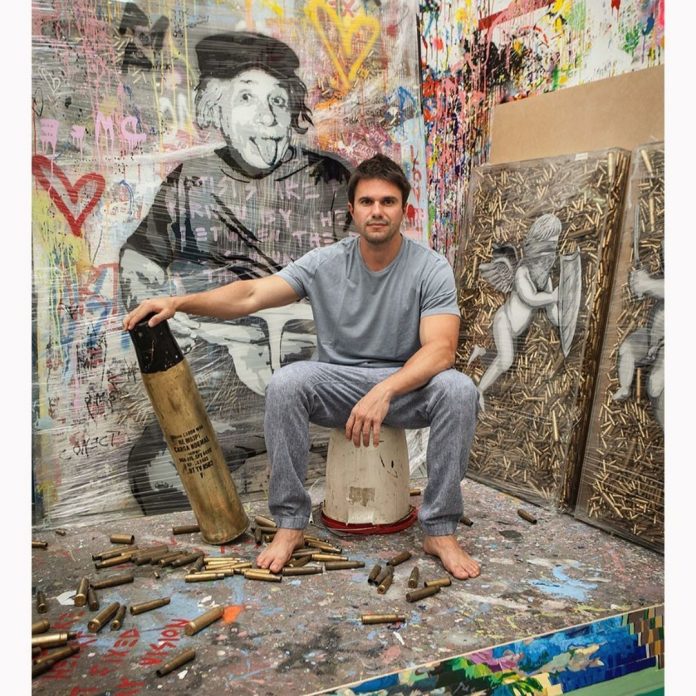 Alonzo Vega, gives life to a new way of seeing art, connecting two separate, but parallel worlds, art, and weapons. Something that has not been seen before in the history of art.

He is the artist who lately attracts the attention of many people and the media. Consider one of the most controversial United States in the 21st century. along with Bansky, Terry Getta, Obey The Giant, Daniel Arsham, among others. Alonzo, without having the trajectory of the mentioned, is causing controversy with his powerful works of art.

For a self-taught artist who believes unburdened, unapologetic inspiration lies at the core of all great art, the world is viewed through a unique lens, and every piece aims to express emotions with a ferociousness that mere words could never achieve.

Alonzo´s life story is far from typical, he comes from a long lineage of successful economic and military leaders and while he never studied art, he did attend exclusive schools and universities in his natal country – but his calling as an artist ultimately made him drop out and choose a life of creative rebellion.

We believe that he is a genius, creating a magical work as an artist, as it leads viewers to look at art from another angle. His works make you feel, they are powerful and imposing. Alonzo has made many paintings in his career that are loved around the world.

“Every piece should speak for itself. It should convey a powerful emotion and spark inner debate”

Due to the blockade caused by COVID-19 in many countries, we believe that this rebellious artist is protesting strongly, creating paintings that question even the urban painter Bansky and expressing his disagreement with the main world rulers for political oppression. You can see more in his Instagram: @alonzovega2

Many major media outlets call him “the bad boy of contemporary art.” Micro economic challenges for pop culture icons and their own personal ancestry, all he did was just a separate class.

Alonzo is inspired by his hobbies, which are shooting, riding a motorcycle, boating, playing the piano, playing squash and golf. Sharpening his senses, he materializes his art in his painting studio. However, we believe that his great-grandfather, an American war hero, General Harold Lee George, who once appeared on the cover of Times magazine, was elected mayor of Beverly Hills and launched Howard Hughes Pan Am Airways in Peru, had a significant role in his artistic works, because Alonzo paints on bullets and fences, artificial barriers that Alonzo constantly challenges.

Alonzo is a self-proclaimed rebel and the fantastic art creator made some impressive visual arts of our time avoiding labels, titles, and explanations. His mantra is simple:

“Art is life, and life is just a Hobbie” and “free will is not a choice”

Alonzo is truly the next legend in the world of visual arts and painting. You will see this legendary painter Alonzo Vega making his name in every part of the world and unique place in the hearts of many people with his impressive art.

According to Alonzo, visual art much like music can influence a person’s state of mind. In simple words, he believes that artists must understand their work before showcasing it to the viewers. Moreover, he is not bound by any set of rules. He believes to let his creativity flow freely without imitating or getting inspired by anyone’s work. With his work, the Peruvian artist has always made impactful statements, meaning his creativity is left open for the viewer’s interpretation. By his life experiences, Alonzo Vega’s art is applauded by everyone all over the world.

“Unburdened, unapologetic inspiration lies at the core of all great art, the world is viewed through a unique lens, and every piece aims to express emotions with a ferociousness that mere words could never achieve.”