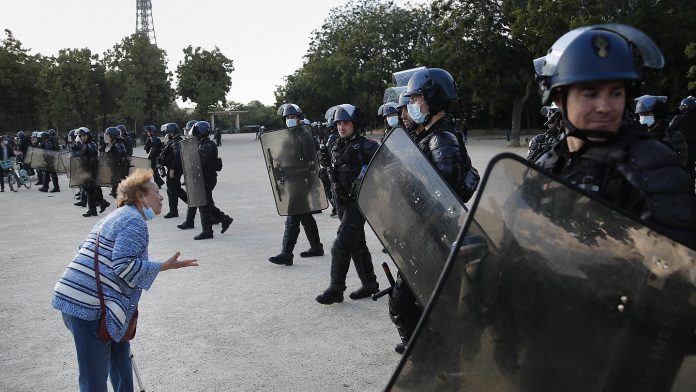 French Interior Minister Christophe Castaner has pledged to curb racism and violence by the police and unveiled a series of measures to improve police forces’ ethics amid growing public anger at police brutality.

“Racism has no place in our society and even less in our Republican police. I will not let the hateful actions of some stigmatise all,” Castaner told a press conference on Monday.

Some 23,300 people in France on June 6 joined “Black Lives Matter” protests to denounce police brutality after George Floyd, an African-American man, died in Minneapolis after being pinned to the ground during an arrest.

Floyd’s death bore similarities with a case in France where Adama Traore, a 24-year-old black Frenchman, died four years ago in police custody in Paris.

France’s state investigators had dismissed the charge of police brutality in the arrest of Traore, saying that the man died of heart failure due to pre-existing medical conditions.

A new probe, commissioned by Traore’s family released earlier this week, said the young man died of asphyxiation due to the arrest technique the police officers had used during the operation.

“Nobody must risk his life during an arrest,” said Castaner, adding “each suspicion must lead to an investigation and each mistake to a sanction.”

With the aim, the Minister said the chokehold arrest would be abandoned and no longer be taught in police and gendarmerie schools as “it has its dangers”.

“No racist can wear the uniform of a police officer or gendarme,” he said.

“Suspension will be systematically considered for each proven suspicion of racist acts or remarks.”

Castaner announced the measures that would help restore confidence in police forces, including the reinforced use of body cameras and the launch of an in-depth reform of the Interior Ministry inspections.

Earlier on Monday, the General Inspection of the National Police (IGPN) said complaints against officers increased by 23.7 per cent last year from a year earlier.

Out of 1,460 judicial inquiries, 868 were related to “voluntary violence”.