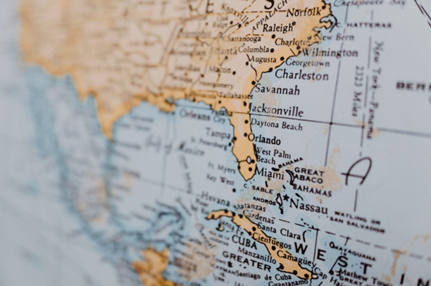 Florida is a great state for driving with the top down through the highways, heading to one of our state’s beaches, amusement parks, or other attractions. However, according to the Florida Highway Safety and Motor Vehicles Department, there are an average of 650 accidents in Florida per day.

Accidents happen for many reasons: negligent driving (including drunk, distracted, or drowsy driving), bad weather, mechanical issues, and the danger of blind spots. But oftentimes, roads can play a role, too. When a certain road has logged a far greater percentage of accidents, there’s often something deeper going on: it could be the speed limit of the road, its curvature, its location, or a combination of all of these factors. Some roads are simply more congested than others. With the enormous amount of people in the state, many of the most dangerous roads are caused by traffic.

Knowing which of Florida’s roads are deadliest is important when driving throughout Florida, so that you can avoid these roads if your route permits it, or be as careful as possible driving on them.

Here is a list of Florida’s eight deadliest roads.

This highway tops the list because not only is it the deadliest road in Florida, but it’s the deadliest road in the entire country. According to federal data, there are 1.25 fatalities per mile on this interstate. One area in particular requires cautious driving: the stretch of road referred to as the “dead zone.” This zone is at the halfway point between Daytona and Orlando. To date, since the opening of the interstate in 1963, there have been nearly 2,000 accidents in the dead zone specifically.

Many believe that I-4’s danger is simply because of the number of cars on it at any given point. It has significant traffic, and oftentimes, lots of construction blocking the roads and providing additional distraction. It’s important to stay alert, drive slowly, and exercise caution.

If you’ve experienced a crash on I-4 due to the negligence of another driver, you could be entitled to compensation for all your economic losses. Hiring a personal injury attorney could be in your best interest. Brais Law- Attorneys At law has an office in the heart of Miami. If you’ve been in an accident on I-4, Keith and his team of car crash lawyers can help you recover.

In Miami, there’s another road that rivals I-4 in danger. Between Little River and the Golden Glades Interchange is the I-95 express toll, where there is an estimated 7.01 fatalities per mile, with 27 fatalities in total over the 3.95 mile stretch.

Another stretch on the same interstate is also quite dangerous, referred to as the “Miami-Dade” stretch. The Wall Street Journal reported that this one stretch had a fatality rate at 8 times the rate of all interstates. In 2015, more people died on this road than in any other county in Florida.

Beach Boulevard is one of the busiest roads in Jacksonville, making it extremely dangerous. Fatalities on this road also include pedestrians and bikers who are trying to cross the road. Between the years of 2013 and 2015, there were 16 deaths and 15 accidents. If you are a pedestrian, it is not advised to cross this road. If you are a driver, keep your eyes out for anyone who is crossing the street. Slamming on brakes last minute or veering to miss hitting a pedestrian can cause an even larger accident.

Interstate 10 is yet another one of the deadliest roads in the country. It’s transcontinental, and runs for 362 miles through Florida. It runs as far west as Texas, and was recently ranked as the fourth most deadly interstate in the USA. It’s suspected that a main cause of so many crashes on the interstate is because of the lack of barriers between lanes, making it easy to swerve into oncoming traffic.

Semoran Boulevard is deadly because it has a speed limit of 45mph, yet has pedestrians crossing the street all day, everyday. Despite its popularity as a road for pedestrians crossing, there aren’t any medians and there are very few crosswalks. Many pedestrians jaywalk across the large road while traffic is flying around them.

The Florida Turnpike, located in Broward County, has a speed limit of 80mph. It was originally created to be the “stress less way” because of its straight shot through several counties in Florida with high speeds permitted. But this is ultimately the reason it’s so dangerous – common causes of accidents include the large number of motorists on the road, large debris, tourists, and motorcyclists.

State Road 60 sees many accidents, too. When it was first built in the 1990’s, it was originally a two lane highway that was very narrow and hard to navigate. Since then, Florida has put in funding to expand the highway and improve its safety, yet it’s still causing accidents at a large rate. Research shows that the bulk of accidents happen early in the morning or very late at night. It can be inferred that it’s a road often taken by intoxicated or tired drivers at these hours, and one should be very careful when driving at these times.

This major Florida interstate is only 75 miles long, yet has an average of 0.87 deaths per mile. It’s a common tourist road as it runs past Walt Disney World and Melbourne. These factors make it easy to run into traffic and cause pile-ups on the interstate.

How to Be Safe On These Dangerous Roads

The first step to staying safe on these roads is awareness. Knowing which roads in Florida are statistically the deadliest will have you on high alert when you need to take them, or have you mapping other routes.

It’s important to stay in the right lane unless you need to pass someone as this lane is traditionally slower, and the slower you are going, the less likely it is that you will hit someone else at a high speed. Keep your eyes on the road at all times, but frequently check your rearview mirrors just so you can get a sense for what’s going on around you.

Because accidents are more likely to happen late at night (especially on Fridays, Saturdays, and holidays with intoxicated drivers), consider getting home early or staying the night wherever you go so that you’re off these dangerous roads at peak accident hours. And, if you are a pedestrian trying to cross major roads without medians such as Beach Boulevard in Jacksonville, don’t risk it. Even if the road seems open at the moment and you think you can run across in time, the danger is too severe with the high speeds on these roads. Find another way around.

This is an article contributed by Keith Brais.

Keith S. Brais is one of a very specialized group of lawyers in the State of Florida that is Board Certified in Maritime and Admiralty Law by the Florida Bar. Additionally, Keith S. Brais holds an “AV” rating from the Martindale-Hubbell Law Directory, the highest rating attainable.